Chiepoo (チープー, Chīpū) is a supporting character in Suikoden IV and Suikoden Tactics. Chiepoo is a Nay-Kobold with grand ambitions to become a great merchant. 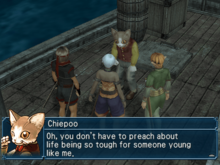 Did Chiepoo just "ok boomer" us?

Chiepoo was a young Nay-Kobold who broke with the tradition of his village on Nay Island and left with the goal of becoming a great merchant. Filled with curiosity, Chiepoo had a bright and cheerful personality and eventually found his way to Razril. He would work at the item store there, stocking shelves.

During the Kindling Ritual ceremony for newly graduated Knights of Gaien, Chiepoo would alert the fledgling knights to a kidnapping attempt in the town's back streets. Chiepoo's call for help would allow the child to be rescued and the Kidnapper to be vanquished. 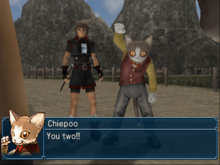 Chiepoo gonna cut you up!

Later, when the hero was exiled, Chiepoo would stowaway on his boat, unaware of its nature, hoping to find somewhere new to explore and learn about business. When the ship washed up on the Deserted Island, he would curious as to whether the various crabs on the island would make for good food. This curiosity eventually drew the ire of the Boss Crab, and Chiepoo would have to be rescued by his crew mates.

Following their departure from the Deserted Island and subsequent rescue by the Kingdom of Obel, Chiepoo would continue to journey with the hero, eventually becoming part of the Headquarters Ship crew and a member of the Allied Forces. Chiepoo's help would prove vital in recovering the Golden Seal when it was stolen by Nalkul on Nay Island.

During this adventure, Chiepoo was surprised to find out he was something of a folk hero to some at the Nay-Kobold Settlement, including Nalkul and Champo. He would spend the Island Liberation War learning about the specialties of every island the ship visited, expanding his business acumen. As the war progressed, he continued to show concern for the hero's continued use of the Rune of Punishment.

Once the war ended, Chiepoo continued to travel for a time before establishing his business, Chiepoo & Co., on the Deserted Island.