Futch is a Dragon Knight and the partner of Black and Bright. He was forced to leave the Dragon Knight's when he lost his dragon, Black. He would turn to the Toran Liberation Army to help him move forward from his grief. 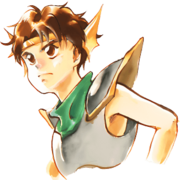 A handsome man with brown hair and eyes, Futch was a medium sized boy who wielded a spear in his adolescence. In Suikoden, he wore a small breastplate over a tunic along with brown boots and gloves. He also wore a distinctive green scarf and winged headband.

In Suikoden II, Futch wore a purple tunic over black pants. He retained his other clothing, including his scarf and headband, and also wore an armband around his upper right arm.

A fully-matured adult in Suikoden III, Futch stood 177cm tall and was well-toned and tanned. He wore a dark, sleeveless tank-top over a purple tunic and a single pauldron on his left shoulder, along with black pants and boots as well as brown gloves. He wore a purple armband on his upper right arm and maintained his distinctive green scarf and winged headband.

As a child, Futch was quick to retort to any perceived slight against him and Black. This was the cause of his animosity towards Ted when he called the young Dragon Knight a brat. His youthful brash confidence is what propelled him to fly to Gregminster Palace despite the dangers involved. 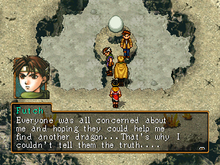 You had me traverse a continent so I wouldn't feel bad about you feeling bad???

When it came to dragons, Futch was very kind-hearted and caring towards them. The grief of losing Black, his partner since childhood, however, cast a deep shadow on Futch's heart. He chose to carry the blame for Black's death but also took comfort in knowing Black loved him enough to die protecting them.

Humphrey Mintz would help Futch understand that though it was noble to grieve for Black, it should not keep him from his future, nor would it be a betrayal of Black's memory to one day partner with a new dragon. After finding Bright and rescuing Kent on Mt. Rakutei, Futch was able to move on from his grief and look to the future.

As Sharon's guardian, he preferred to apologize for her rather than scold her directly. He saw something of himself in her youthful impetuousness and desire to see the world. 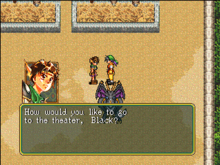 Where's my Futch & Black at the theatre scene?

Futch was a 9th Rank Dragon Knight who was partnered with the dragon Black. During the Gate Rune War, Futch and Black were hired to escort the Imperial Guard to Magician's Island. Feeling Ted was disrespectful of him and Black, the two would argue during the flight.

Later, Futch was reunited with the leader of the Toran Liberation Army at the Dragon's Den while the dragons were filled from a sleeping sickness. Impatient and wanting to help prepare a cure, Futch rushed off to gain a needed ingredient, the black dragon orchid, from Gregminster Palace's Floating Garden. 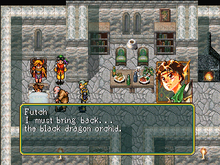 There, he was caught by Emperor Barbarosa, who let the child go, as he had no part in the dragon's poisoning. As Futch was leaving, however, Windy attacked him using her magic, shooting Futch and Black out of the sky. Black was killed in the fall, taking the brunt of the impact so that Futch survived with the black dragon orchid intact.

After Futch woke, Joshua Levenheit told Futch that, as he had lost his dragon, he could no longer stay with the Dragon Knights. Joshua Levenheit asked Humphrey Mintz to look over Futch and following the end of the Gate Rune War, Futch departed with Humphrey on a journey.

Futch and Humphrey headed toward Crystal Valley to research dragons but were slowed by the Dunan Unification War and were forced to stay in Highway Village. Futch befriended Kent and would share stores of dragons and the Dragon Knights with him. 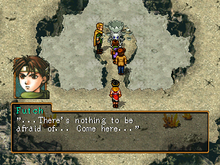 When Kent failed to return home, Futch took part in a search for him on Mt. Rakutei. After rescuing Kent from an attacking Harpy, they found what appeared to be a dragon's egg. Futch was hesitant, as he still missed Black terribly, but once the egg hatched he eventually christened the new pup Bright.

Futch and Humphrey joined the New State Army to repay its leader for his help in searching for Kent. After the war, Humphrey and Futch continued on their journey to the One Temple in Crystal Valley in order to research Bright's unique coloring and undersized body to confirm his dragon status. 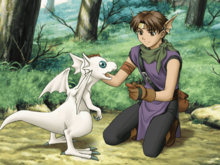 It turned out Bright was a Digimon

During their journey, a wild dragon would attack Milit Village, where they were staying. Futch and Humphrey would help Nash Latkje and others fight against the wild beast, while Bright seemingly opened a portal to the World of Wings and Scales, potentially confirming his dragon status. Following the battle, Futch and his friends would continue their journey.

Eventually, having regained his status as a Dragon Knight, Futch would work hard over the years and rise to the class of 4th Rank Dragon Knight and Vice-Commander of the Knights of the Dragon's Den. Humphrey would pass on his sword to him and Futch would wield it in battle from that point on.

Seen as reliable and dependable, he was tasked with taking care of Sharon, the daughter of the knight's leader. He was sent to the Grassland during the War of the Champions to aid in reconnaissance against the forces of Harmonia. He would fight alongside the Fire Bringer after they helped him find Sharon, who was always trying to explore the outside world.

Once the war was over, he would return to the Dragon Knight's Domain and begin studying towards becoming a 3rd Rank Dragon Knight.