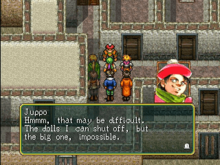 That's your problem, the switch is set to 'Evil'.

Juppo was an inventor of various machines, bearer of the Gadget Rune and a self-proclaimed trickster, always dressed in bizarre clothing.

Already able to create some mechanical devices, he travelled to learn more. During the Gate Rune War, he had met Lepant while in the middle of a journey to learn about mechanical devices and became his guest after Lepant recognized his talents, constructing several devices for the security of Lepant's mansion.

He would join the Toran Liberation Army along with Lepant. At Toran Castle, he spent his time working around Kamandol's laboratory, with the two sometimes trading knowledge with one another. During the war, he would use his creations to fight the Imperial Army as part of the Tricksters unit. 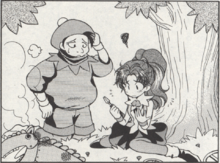 "Y'see, Meg, I think the issue is you're just not dressed goofy enough."

Following the war, he lived in a workshop in Rikon for about two years, honing his skills and occasionally receiving orders for curious gadgetries such as mechanical birds and more practical tools such as herb grinders. While there, he tried to counsel his niece, Meg, whose bad habit of ignoring blueprints and hastily disassembling and reassembling creations in different (usually non-working) configurations, often frustrated him.

He had plans to leave on a journey to gain further mechanical knowledge. So, in order to shake off his niece, who had been pestering Juppo to teach her, he left her his creation, the barrel robot Gadget, and ordered him to bring her home to Lenankamp before departing.