Rowd (ラウド, Raudo) is a minor antagonist in Suikoden II, who also appears in Genso Suikogaiden Vol.1. Rowd is the captain of the Unicorn Brigade and later the leader of the Royal Highland Army 4th Company.

Rowd was born in Kyaro Town. When he was a youth, he volunteered for the Highland Army, becoming a member of the Unicorn Brigade. Due to excellent performance, he would go on to be appointed Captain of the Unicorn Brigade. It is said that he was the brother of a blind girl living in Kyaro Town, but the facts are not clear on the matter. The blind girl would talk about how her brother was working hard to improve his situation and make a lot of money so he could take her to the Toran Republic for treatment as her condition was not incurable. As a person, he had a belief in his own strength but lacked a sense of pride. 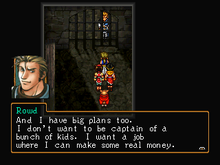 Talk about your captive audiences.

As captain of the youth brigade, Rowd was respected by his younger subordinates and he in turn treated his charges well enough. He was stricter with older soldiers under his command, such as Jowy Atreides or his friend. Rowd was a man willing to do anything to advance his career. He had entered the military dreaming of a glamorous life in the Imperial Capital rather than a posting in his small country town and so, he would communicate with Luca Blight, aiding him in his plot to wipe out the boys of his own Unicorn Brigade in order to fabricate a reason for war against the City-State of Jowston.

Still, despite Rowd's lack of hesitation for his actions, he would apologize unemotionally and directly to Jowy and his friend after they were recaptured and sentenced to death. The morning before their scheduled execution, Rowd looked upon the new day as a new dawn for his career, ruminating aloud. Finally feeling fulfilled, he failed to notice the rescue of his prisoners until it was too late.

As a result, for his plotting, Rowd earned a decent position, being appointed a corps commander in the Highland Army. Rowd led the Highland Army siege on Greenhill City but was unable to successfully take the city, due in part to the efforts of Nash Latkje. Much to his chagrin, the city would shortly after being captured by Jowy Atreides, commander of the 4th army. He would show a thorough prudence in combat, being unwilling to rally forth to assist his fellow officers without an overwhelming advantage in his favor. When Jowy would become King of Highland, Rowd feared revenge. Fearing for his safety, he would vanish soon after Jowy's coronation.

By the time L'Renouille had fallen, marking the end of the Dunan Unification War, rumors suggested that Rowd had fled to the south but that is not a certainty. At the same time that Rowd was said to have fled south, the girl rumored to be his sister would similarly disappear from her home. If it is true that Rowd was the brother of this girl, it would offer further reasons for his actions.

Rowd is fought as a boss enemy in Suikoden II. He is not normally intended to be beatable but can be brought down through sufficient grinding and preparation. Defeating Rowd does not change the plot or grant any significant reward, save for 10,000 potch.