Alen (アレン, Aren) is a supporting character in Suikoden who makes a cameo in Suikoden II. During the Gate Rune War, Alen is a member of General Teo McDohl's Armored Cavalry, along with his colleague Grenseal.

Alen served as one of the commanders of the Scarlet Moon Empire's Armored Cavalry alongside Grenseal, under the command of General Teo McDohl. His personal loyalty was to Teo, rather than the Empire as a whole. Bearing a Rage Rune, he held the nickname of the "Flame General" due to his intense, heated personality.

Born to a fishing family, Alen was first inspired to join the Imperial Army at the age of 12 when he saw Teo McDohl's victory parade in Gregminster following his victory over the City-State of Jowston. His parents were reluctant to give their blessing, partly because of their lack of noble or military ties, but eventually agreed and at 15, Alen would enroll in the Imperial Academy.

Within six months, Alen was recognized as one of the more promising students. Skilled in swordplay from the beginning, he had steadily improved in rune handling but suffered from an impatient temperament. He would be classmates with Clet and would quickly develop a rivalry with Grenseal, whose more reserved, studious natured irked the passionate Alen.

An argument between the two would provoke Grenseal into improving his swordsmanship as well as his mind, and in the 4th round of a training tournament, Alen would be soundly defeated by Grenseal's more methodical fighting style. This greatly unnerved Alen as he felt that his sword skills were what gave him the edge in competing for a rare, coveted appointment in the Central Army.

Alen would attempt to rematch Grenseal later that night, only for the two to come to the understanding that they had both been driving the other forward the entire time. More appreciative of each other, the two vowed to do all they could to graduate to the Central Army, a goal they eventually reached.

During the Gate Rune War, Alen aided General Teo in the First Battle with Teo. His intensity led him to ask Teo for permission to continue pursuit of the enemy after Pahn had dueled Teo but he was rebuked and ordered to withdraw. Following the Imperial defeat at the Second Battle with Teo, Alen vowed to battle down to the last man. Teo once again had to tell Alen to stand down, when Alen tried to stop him from dueling his son. 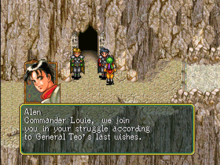 When Teo was defeated, Alen pleaded with Teo to hold on, unsure of what the empire would do without him. However, Teo ordered Alen and Grenseal to join the Liberation Army, saying it was the best thing for them to do. Alen consented to Teo's final wish. It said that his passionate soul meant that if he had not held Teo's final request in such high esteem, Alen may never have surrendered to the Liberation Army, viewing surrender as a great humiliation and feeling that while one lives one should always fight.

Alen served the Toran Liberation Army throughout the remainder of the Gate Rune War, showing no regret in his choice as he continued to burn brightly on the battlefield. Like many former Imperials who were unfamiliar with the Liberation Army, he stayed at the castle's western building.

Following the war's end, Alen became the right Commander of the Republican Guard, serving along with his colleague, Grenseal. Three years later, during the Dunan Unification War, Alen continued to serve in this position, being stationed in Gregminster.