Viktor (ビクトール, Bikutōru) is a major character in Suikoden and Suikoden II who also makes a cameo in Genso Suikogaiden Vol.1.

Viktor is a mercenary who joined the Toran Liberation Army and the New State Army. Having survived many trials and tribulations, he has a keen eye for character and was one of the first people to sense the hero's true potential as a leader. 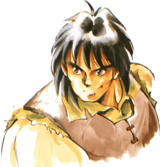 A large, muscular, tanned man, Viktor had black, unkempt hair and dark brown eyes. He wore a breastplate over a mustard tunic with the arms torn off. Due to his size and appearance, he was sometimes called "Bear", a nickname he usually laughed off. In his younger days, he had worn a similar tunic with the arms attached, was slenderer, and had neater hair.

He also wore black pants, as well as brown boots, gloves, and a belt. He also carried a pouch with him, secured to a strap that we wore across his chest. The costume was designed with an emphasis on practicality as a warrior. His sword name, Taia Sword, is the same as a powerful sword in the original Water Margin, though it was not wielded by his literary equivalent, Lu Zhishen.

Viktor had a strong sense of justice and always wielded his sword for what he believed in. Viktor often held his despair deep inside so as not to bother anyone. It was said he had recurring nightmares of what had happened at North Window. Although outwardly brash and intimidating, he also had a childlike curiosity and a keen eye for detail which made him an invaluable comrade. He was a good judge of character, quickly recognizing the leadership qualities of several youths. 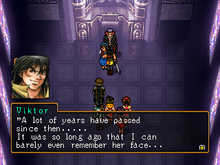 As a man who lived his life searching for vengeance, Viktor viewed himself as someone who could only live in battle. During the escape from Gregminster Palace at the end of the Gate Rune War, he described himself as someone not needed once the war was over. He felt that his blood-stained hands were not suited to creating a new era of peace.

Over the years, he never forgot his true mission, to find and defeat Neclord. When the opportunity arose during the Gate Rune War, Viktor dropped all pretense of any other motivation. Even following Neclord's defeat, Viktor's immediate reaction was to leave for North Window. When Neclord revealed himself during the Dunan Unification War, Viktor was crushed but quickly refocused himself on striking down the vampire once and for all.

Viktor grew up in the town of North Window in the City-State of Jowston. He began his mercenary career at a young age, becoming acquainted with Anabelle of Muse City at some point in time. His father had been the commander of the 4th North Window unit but fell in combat against the Scarlet Moon Empire in SY 447. His sword skills were self-taught. 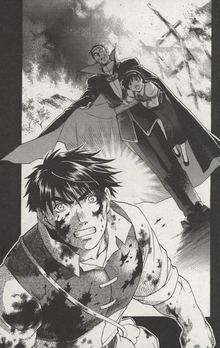 I painted all those fences for nothing!?

He avoided the destruction of the town by Neclord as he had been out of town buying medicine for his mother, and other supplies, at the time. He would rush back to the village in an attempt to rescue Daisy, but was easily defeated by Neclord and nearly killed, his life only saved by a Sacrificial Jizo he had bought at her request.

After recovering in Kuskus Town, he would be part of the South Window City investigation team, helping to clear out the remaining zombies in North Window. Once this was complete, he would see to the burial of every villager personally, refusing to be helped.

Following this, Viktor fell into a stupor, having been refused a task force to hunt down Neclord with. In the Lion's Fang Inn, he would be rescued from a drunken bar brawl by Zamji. Completely despondent, Viktor would spend the next six months with Zamji's family, slowly recovering emotionally from his ordeal.

Learning of the increasing tensions between South Window and Two River City, Viktor would work with Anabelle and Zamji to uncover the plot and defeat the arms merchants, including an acquaintance, Kou Long, who had set the two city-states against one another, using the incident at North Window as a flashpoint.

Uncovering the conspiracy and capturing Kou Long, peace would be preserved and sometime later, Viktor would decide to leave Jowston in order to find and destroy Neclord. 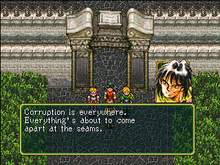 "I promise I won't talk politics." One drink later...

Ever since then, Viktor wandered the lands as a mercenary, hoping to gain his revenge against Neclord someday. He gained the nickname Vagabond Viktor around this time. He wielded a large, two-handed sword in battle. He was a member of the initial Toran Liberation Army led by Odessa Silverberg during the Gate Rune War. His self-taught sword technique made him a vital member of the fledgling force.

It was only happenstance that led to Viktor coming across the hero during his flight from Gregminster. He would take advantage of the boy's plight to bilk his bill at Marie's. Normally, Viktor would have walked away at this point, but his instincts kicked in and he immediately decided to take the hero back to Odessa.

After the death of Odessa, he would follow the leadership of the boy he brought into the Liberation Army. He would later convince Flik to align himself with the new Liberation Army and would accompany the group through their missions in Kunan. Following the death of Gremio, who had accompanied them despite Viktor's warnings, he would take Gremio's axe from Soniere Prison. 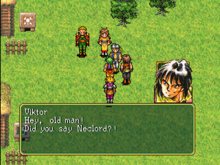 Later during the Gate Rune War, he would discover that Neclord was in Lorimar. Obtaining the Star Dragon Sword in the Cave of the Past, Viktor would be finally able to exact his revenge. Following this he took a leave of absence to return to North Window but rejoined the army after being rescued from Moravia where he had been imprisoned on his return.

Upon the Liberation Army advance into Gregminster, Viktor was part of the group that fought Ain Gide. Although he recognized Ain Gide's resistance as ultimately doomed, he knew that as a warrior, Gide was living his life true to his convictions, just as Viktor did. At the end of the war, he would stay behind in the crumbling castle along with Flik in order to ensure their leader's escape. In the immediate aftermath of the war, he and Flik had hid out in an inn in a nearby village to avoid the remnants of the Imperial Army. 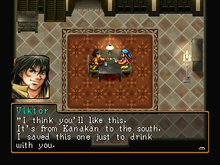 As opposed to Kanakan of the north

Afterwards, Viktor had left for South Window Principality with Flik but had gotten lost in the Karakas Desert. Afterwards, Viktor said that he had forgotten something important, so they had to make another round trip through the desert. After a year and a half, they met with Anabelle, the mayor of Muse City and started a mercenary group in her employment. Another year and a half after that and Viktor would discover a young man from the Highland Kingdom who had narrowly escaped a plot by Luca Blight.

The Dunan Unification War would soon break out and Viktor's forces would be routed by the Highland Army. Making his way to Muse City, he would fight and drink alongside Anabelle one more time, buoying her spirits in the face of the imminent Highland attack. Sadly, Anabelle would be assassinated by Jowy Atreides soon after and Viktor would have to flee the city as it fell to Highland. 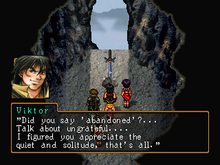 Swords are for life, not just for specific vampire issues

Arriving in South Window City, Viktor would petition Mayor Granmeyer for help. In return, Granmeyer had Viktor investigate some disappearances around North Window. There, Viktor would discover that Neclord was still alive, much to his dismay. Journeying to the Cave of the Wind, Viktor would reclaim the Star Dragon Sword, which he had abandoned there due to its complaining.

Returning to North Window, Star Dragon Sword in hand, Viktor would confront Neclord. The vampire tried to confuse Neclord by resurrecting Daisy. However, Viktor was not fooled and decapitated the false body. Still, this bought enough time for Neclord to escape for the time being. 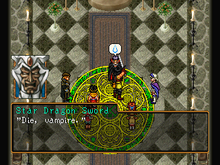 Why not let the sword get in the last word?

Viktor helped greatly in the foundation of the New State Army, even suggesting the use of North Window's castle as its headquarters and supported its leader through his hardships. He was a prominent commander throughout the war and a driving force behind the army.

Upon Neclord's return in Tinto Principality, Viktor would gather the aid of Kahn Marley and Sierra Mikain, and together they were able to strike down the vampire once and for all, sealing Viktor's revenge for good. After destroying Neclord in Tinto City, Viktor would continue to serve in the New State Army for the remainder of the war.

Following the Dunan Unification War, Viktor no longer had his journey of revenge. Instead, he began a journey of no purpose with his friend Flik. That said, as a person who lives by the sword, their eventual destination would likely be another battle in which they are needed.

Sometime following this, Viktor would manage to pass off the Star Dragon Sword to Edge, after he wielded the sword to destroy a vampire threatening his village. Hearing word of the Harmonian invasion of Dunan, Viktor and Flik immediately left to fight in the conflict, leaving the sword with Edge.