Troy (トロイ, Toroi) is an antagonist in Suikoden IV. Known as the "Child of the Sea God", Troy serves as commander of the Kooluk Empire's first fleet. 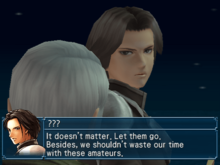 W-why did you try and kill us only to let us go???

Troy was a member of the Kooluk Empire's Imperial Faction who, as well as being a skilled warrior, also served as the talented and resourceful commander of the 1st Kooluk Fleet. His reputation and regard were such that he was spoken of as the "Child of the Sea God".

Much of his reputation came from the SY 299 Gaien attack on El-Eal Fortress. Captaining a single ship, he was able to put to rout several ships belonging to the Middleport fleet. Surviving Knights of Gaien, including Glen Cott, would tell stories of his prowess, causing him to be regarded with something approaching awe in Razril and Gaien.

He worked with Colton to implement the Governor's Southern Expansion Policy although he disagreed with Graham Cray's methods and was worried about the political machinations of the Patriarchal Faction. During a scouting mission near Razril, he would meet the hero and his friends as they were adrift as sea. When they overheard an incrimination conversation between Troy and a contact, he would choose to not impede their escape, believing them to be unimportant.

As the conflict with the Island Nations grew into the Island Liberation War, Troy found himself isolated from the Governor by Cray's machinations. His attempts to ascertain Imperial approval were frequently stymied and he would speculate with Colton whether the Patriarchal Faction's Central Committee were interfering in affairs at El-Eal Fortress. 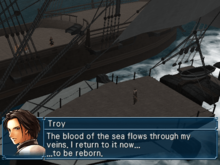 Reborn as a 6-foot sack of fish food.

Troy would argue against the use of the giant Rune Cannon to destroy Iluya Island, mindful that it could galvanize resistance to Kooluk plans in the region, but his concerns were dismissed. Later in the war, he would journey to Na-Nal Island, convincing the Na-Nal Island Chief that an alliance would be in both their best interests. However, the alliance quickly dissipated when the Kooluk soldiers there reacted with retaliatory slaughter after being poisoned by the Elven Remedy, bringing Na-Nal and the Allied Forces into accord.

As great as he was as a warrior and general, Troy's forces would be outmaneuvered by the stratagems of Elenor Silverberg as the war continued. Once El-Eal Fortress fell in the final battle, he would challenge the Allied Forces leader to a final duel as their ships prepared to flee the fortress' destruction.

Defeated in the duel, Troy was offered the chance to surrender and leave his sinking ship, but he refused the offer, believing that he should die as a soldier and went down with his ship. In his final moments, he realised that the man who had sealed his fate was the same person he had let escape so long ago. In Kooluk, he would be remembered as the last truly great member of the Imperial Faction with his death marking the decline of the faction.

Troy is fought as an event enemy in Suikoden IV once, in an unwinnable battle alongside Colton, on board the Mystery Merchant Ship. His HP is infinite, and his stats are unknown.

He is not confronted again until the very end of the game. The final gameplay segment of Suikoden IV is a duel between Troy and the hero, making him the final boss in that regard.