Luc (ルック, Rukku) is a character in Suikoden, Suikoden II, and Suikoden III.

Luc is the powerful apprentice of Leknaat, as well as the possessor of the True Wind Rune. Originally from the Holy Kingdom of Harmonia, he came to work for Leknaat under mysterious circumstances.

Luc was said to be a very handsome boy when silent, but his bitter, prideful attitude and poor character tended to negate that. He has green eyes and brown hair that reaches his shoulders.

In Suikoden and Suikoden II, he wears a green tabard over white robes with gold fringe as well as brown boots. He also wears a small circlet around his forehead. For Suikoden, Kawano Junko designed Luc with the idea of making him coy. Meanwhile, Murayama Yoshitaka felt that he had a strange presence and said a lot with his eyes, even when silent.

In Suikoden III, he wears a long, dark green coat over a brown shirt, along with black pants, brown boots and black gloves, to hide his True Wind Rune. His clothing is lighter and more practical for the traveling he was undertaking as part of the Destroyers.

He no longer wears his circlet, and his hair is cut slightly shorter than before. This is one of the few things that differentiates him physically from Sasarai, who he looks otherwise identical to. His ring, the Guardian's Eye, serves as a medium in place of a staff, and is both expensive and precious.

The mask he wore as the Masked Man was previously Leknaat's, which she wore after fleeing the Clan of the Gate massacre. Luc would play with the mask as a child, finding it in Leknaat's storage.

He has a great deal of magical power and is skilled in the arts of summoning and teleportation. He was also terribly unsociable and said to have a rotten personality. As a youth, he was considered cocky, mocking, and generally unpleasant to be around. This discrepancy being his looks and personality was said to make him more charming to some. Still, he was always unfalteringly polite around Leknaat.

Even so, at the time of the Gate Rune and Dunan Unification Wars, he had hope in his heart that he was fighting for a better future. As he grew older, this gave way to a sense of despair and anger about his destiny and the nature of his existence, entwined with the True Wind Rune.

Though filled with an uncompromising sense of duty and seemingly prepared to do anything for the greater good, his heart also contained real human frailty. The most obvious example being his letting the little girl he encountered in the Karaya Village flee. Although it could have proved detrimental to his entire plan, he could not bring himself to personally kill the child.

This conflict, of dooming the Grassland to save the future, and the weight of responsibility Luc placed upon himself would continue to haunt him over the course of the War of the Champions. Although he considered himself something other than human due to the nature of his creation, Luc himself was unaware that he had lived for decades as a human and was fighting for and with that same humanity he forsook.

In Suikoden, Luc used the power of the True Wind Rune to summon a single golem, but in Suikoden III he was able to conjure up and control numerous monsters on the battlefield. Over the years, he mastered the techniques of his master, Leknaat, as well as his True Rune. His teleportation ability is also based on his True Wind Rune, using it to activate a teleportation space around himself to another location in an instant.

Luc was created as a clone of Hikusaak, leader of the Holy Kingdom of Harmonia, in order to bear the True Wind Rune. However, he was considered a failure as the True Rune became intertwined with his soul. As such, he had been confined to the One Temple, used merely as a storage device for the True Rune.

When he was five years old, Leknaat would take pity on his circumstances and rescue him in what would later be described as an "incident" at the temple. He would be taken to Magician's Island and raised as Leknaat's apprentice. Luc would study under Leknaat, perform tasks for her, and assist in the cleaning of her home. 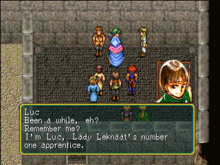 Oh you're going to be trouble.

During the Gate Rune War, Luc surprised McDohl and his party, summoning a Golem for the party to fight under the pretext of establishing their identities. After the battle, he would take the group to Leknaat and teleport them back to the shore of Magician's Island after their audience was finished.

Following the end of the Gate Rune War, Luc disappeared with Leknaat. 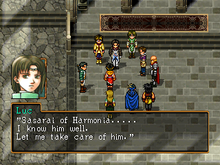 When Leknaat gifted the New State Army the Stone Tablet of Promise during the Dunan Unification War, she also gifted them Luc, despite his own consternation. However, Luc was focused when he noticed the presence of the Harmonian officer Sasarai in a skirmish at Radat Town.

Following the battle, he revealed that he knew Sasarai well and told the New State Army to let him deal with him. Using his True Wind Rune, he decimated Sasarai's forces instantly, forcing them to withdraw their support from the war. His similarity to Sasarai was noted but no one knew of their true connection. This confrontation also showed how truly powerful Luc and his True Wind Rune could be when used.

Following the war, he considered his role ended and return to Lady Leknaat's service.

Standing Against the Grey World

In the year 464, Luc would travel to Harmonia, curious about "witches", a term used for non-runic magicians and also a label applied to Leknaat. There, Luc would help rescue the young magician Sarah, who was imprisoned in Crystal Valley much like he once was, bringing her to Leknaat.

As Luc's soul was intertwined with his True Wind Rune since he was born, he eventually came to know the true will of the True Runes; that things would fall into silence and order in the future, leaving everything as a perpetual Grey World. Fearing mankind was trapped in a prison of destiny, Luc hoped to break the balance between Order and Chaos and, in that way, change the future.

Luc's ultimate goal was to destroy his own True Wind Rune, which necessitated collecting all the elemental True Runes. He would eventually leave Leknaat's service, remarking that she would be unable to stop him from beginning his plan with her incomplete Gate Rune. Luc would reappear in the Grassland. With Yuber, Sarah and Albert Silverberg by his side, he would instigate the War of the Champions between the Six Clans and Zexen. His actions would create a web of mayhem that would endanger the entire world.

Through skillful maneuvering, Luc was able to gain the rank of Bishop in the Holy Kingdom of Harmonia, participating in the invasion of Grassland as the mysterious Masked Man. It is not known if he managed to get a private audience with Hikusaak but he still managed to leverage the vast resources at his command to search for the elemental True Runes outside his grasp under the pretense of fighting the War of the Champions and claiming them for Harmonia.

However, his plan would have cost the lives of many people in the Grassland and beyond. This would weigh heavily on Luc's mind, such as when he encountered a young girl during the massacre at the Karaya Village. Speaking privately with Sarah at Le Buque, he confessed that he did not yet have the courage to go through with his plans.

Still, with the fate of the world seemingly on the line, Luc would continue on, determined to forge ahead with his own will to the end. He encountered Geddoe at Mt. Senai but did not realize he was the bearer of the True Lightning Rune as the seal at the Ancient Highway was not yet dismissed. Even his True Wind Rune could not penetrate past such a seal. 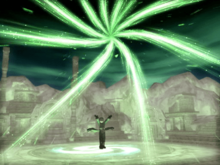 Confronted by Jimba deep within the Sindar Ruins, Luc would affirm his decision to let go of his feelings in order to challenge fate before defeating Jimba in combat, leaving him for dead.

Ultimately, his plan would fail, thwarted by the Fire Bringer. Defeated at the Ceremonial Site where had hopes to destroy his True Rune, he would pass away as the ruins collapsed, a casualty of fate, but with a sense of contentment as he felt his soul stir within him.

Though his name would be removed from official histories in Harmonia and elsewhere, he would always be remembered as one with the strength to defy fate.