Stallion (スタリオン, Sutarion) is a supporting character in Suikoden, Suikoden II, and also makes a cameo in Genso Suikogaiden Vol.1.

Stallion is an elf with a gift for speed beyond most anyone else. His use of his agility to escape perilous situations sometimes means people underestimate him. 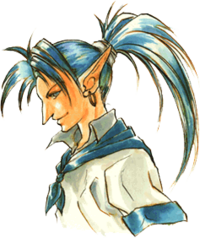 Stallion has long blue hair, tied into a ponytail, and blue eyes. He has a protruding nose and long pointed elf ears, the left of which was pierced.

In Suikoden, he wore a white tabard with blue piping over a white undershirt, the collar of which was erroneously colored blue in his full body artwork.

In Suikoden II, he wore a purple scarf and a blue tabard with white piping over a white undershirt. He also wore black pants and pale green boots, as well as dark, fingerless gloves and a purple arm brace on his left arm. 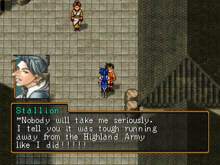 Truly deserving of a medal of lack-of-courage.

Incredibly fleet-footed, Stallion could run 100 meters in around 7 seconds. He gave himself the nickname "Great Runner Stallion" for his skill. For him, the only thing that mattered was running and improving his speed and he held little interest in mundane matters such as war or politics. In that sense, he was very different to most other elves.

Stallion excelled at sensing danger. This, combined with his remarkable speed, allowed him to escape perilous situations but also caused some to scoff at him as a coward, saying Stallion only showed his true speed when fleeing. He himself held great pride in both talents.

He was popular among Suikoden development staff for allowing play testers to navigate the game at an accelerated pace.

Stallion is an elf who is extremely fast, thanks to his Godspeed Rune. Stallion was extremely proud of his speed and considered himself the fastest pair of feet in the Village of the Elves. His speed was such that he held the nickname "Great Runner Stallion". 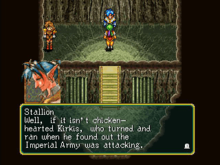 You are literally in jail for the same crime, my dude.

Stallion was locked in the village's prison after running away during the battle against Kwanda Rosman. After being freed by Sylvina, Stallion used his incredible speed to save Sylvina and himself from the Burning Mirror. Reuniting Sylvina with Kirkis at the Kobold Village helped reaffirm Kirkis' beliefs and inner strength, which had been rocked by the destruction of the Village of the Elves.

After the Battle at Pannu Yakuta Castle, Stallion asked to join the Toran Liberation Army. Stallion served the Liberation Army throughout the war, acting as a messenger between Sanchez and McDohl when Teo McDohl attacked Toran Castle. However, he was of limited use as a scout due to his habit of running from danger without taking in his surroundings.

Following the end of the Gate Rune War, Stallion departed the newly formed Toran Republic, going on a journey to become the fastest man in the world. 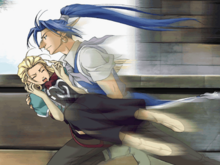 He makes a killing in fast food delivery

Stallion's training eventually took him to the City-State of Jowston. While he was in Greenhill City, the Highland Army attacked. Using his speedy feet, he was able to rescue Teresa Wisemail from a pinch. Following this, Stallion fled to Radat Town, though few there took his story seriously.

After meeting the hero and telling him his story, Stallion challenged him to a race. After somehow being beaten by the young leader, Stallion agreed to join the New State Army. During the Dunan Unification War, Stallion continued to train, running up and down several parts of the headquarters, including the farm, the garden, and Jeane's shop.

At the end of the war, Stallion continued on his journey.

Stallion was named after the 1985 video game Starion, which was released on the Commodore 64, ZX Spectrum, and Amstrad CPC. In that game, the Starion is a young rookie star pilot from the far future year of 2010. A stallion is an ungelded male horse, often larger and stronger than gelded compatriots due to higher testosterone levels.

Stallion's Suikoden weapons are named Bow of Amrita, Bow of Shiva and Bow of Vishnu, all of them named after elements of Hinduism. Amrita is a drink that gives people immortality, Shiva is one of the three most influential deities of Hinduism, and Vishnu is the Supreme Being of Hinduism.