The Highland Kingdom (ハイランド王国, Hairando Ōkoku) was a nation located on the Northern continent. It forms part of the setting for Suikoden II.

The flag of the Highland Kingdom is white, with blue tones. The Beast Rune, which was bestowed by Hikusaak along with the title of King, is also a recurring motif, represented by the white wolf as a symbol of masculinity and nobility.

Highland lies in the Dunan, located in the northeast, by the Great Sea. It is immediately bordered by the Holy Kingdom of Harmonia to the north and the City-State of Jowston to the southwest. The northern portion of the country consists for large, open plains while the southern portion, separated from the north by the Tenzan Pass, is more mountainous and isolated. 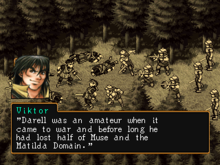 Wars with Jowston over land and resources would fill Highland's history.

In the past, the Highland region existed as part of the southern territories of the Holy Kingdom of Harmonia. The Highland Kingdom was founded in the year 237. In that year, Mauro Blight received the Beast Rune and the title of King from Harmonia for his work in quelling civil war in the nation. Although ostensibly a reward for faithful service, the lands were granted with an ulterior motive; to provide Harmonia with a buffer zone against rebellious states, such as the Scarlet Moon Empire.

Centered around its capital of L'Renouille and being a military-focused nation, Highland had been involved in repeated military conflicts, for many years, with the City-State of Jowston. The roots of this conflict extend back to the year 252 when Highland took advantage of civil war in the Dunan Monarchy, invading what was then eastern South Window (modern day eastern Muse). As Highland had a smaller area and population compared to Jowston, the nation saw a necessity in keeping an advantage in terms of military power, leading to a strong military influence as well as a strong meritocracy.

428 saw the beginning of the Highland-Jowston war, with Highland under the reign of King Robert and the military leadership of Han Cunningham, invading Jowston and quickly seizing Muse City. Greenhill and Matilda would soon follow. However, 432 saw the Jowston Army's Great Offensive push back the invading force, liberating Greenhill and Matilda. The moderate King Agares' ascension to the throne in 434 allowed for a cease-fire to be agreed on between the two nations, following the settlement of a border dispute centered on Kyaro Town and an uneasy peace settled in for a while although espionage and covert attacks, such as the one which struck the Blight royal caravan in 443, continued. 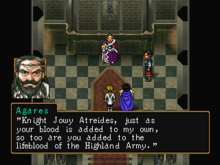 King Agares was the first of three kings to fall in Highland's final days.

Highland's more peaceful direction would soon be challenged by the military, led by Prince Luca. In 460, an invasion of Jowston by Highland would be orchestrated by Luca. This war would eventually become the Dunan Unification War and would entail the assassination of not only Agares, but Luca as well, by Jowy Atreides as the war raged on. Although Highland held the initial advantage, scattering the City-State troops, a resistance organized at a base on the ruins of North Window would eventually form the New State Army. Eventually, the Highland forces would be defeated and with a final invasion of Highland itself, the Kingdom would be brought to its demise. It would be reorganized as Higheast, a province of the new Dunan Republic.

The very existence of the Jowston Alliance is owed to Highland's attempted invasions of the region during the final years of the Dunan Monarchy. Since that time, border clashes and minor engagements have been frequent, usually with tense cease-fires being signed afterwards before another clash would flare up. The two most prominent wars between the two nations were the Highland-Jowston war of 432 and the Dunan Unification War of 460, which would see the destruction of both nations. 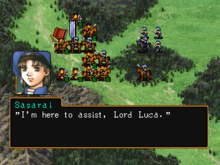 As Highland was a nation formed by the loyal Mauro Blight out of lands gifted to him for his role in quelling civil war in Harmonia, Highland has always maintained an intimate relationship with Harmonia. Since the establishment of Highland, the two nations have always been in alliance. However, that does not mean that trust is very high between the two. Although Harmonia is willing to support Highland with reinforcements, they will also not hesitate to send spies to infiltrate the country. During the Dunan Unification War, Harmonia would provide reinforcements to the Highland Army and following the war, would attempt to invade the region and restore the Highland Kingdom in what would be known as the Higheast Rebellion.

Although seperated by the City-State of Jowston, Highland and the Karaya Clan of the Grassland would enter into an alliance during the Dunan Unification War. In exchange for their support, the Karayans were to be granted lands taken from them by Greenhill Principality once the war concluded.

Although distant, Luca Blight's actions during the Dunan Unification War, would cause worry for the Toran Republic. This would lead to President Lepant offering reinforcements to the New State Army.