Mathiu travelled to Seika, where he established a school. Mathiu also travelled to the Grassland for reasons unknown, before returning to Seika in the year 453. Among his students were Apple and Shu who in turn became famous strategists as well. At some point, he expelled Shu for using his intellect for selfish gain. Hey, you can't talk about Flik and Odessa kissing like that, buster!

However, after McDohl rescued a student taken hostage by Imperial soldiers order by Kasim Hazil to bring Mathiu back into military service, Mathiu realized he could no longer hide away from the world and, passing on Odessa's wishes to McDohl, joined the Liberation Army as its strategist.

As strategist, Mathiu inherited the task of uniting various rebel factions throughout the land, incorporating dissatisfied parties and training them into an effective corps that could stand up to the Empire. His strategies usually involved intense cooperation between differing groups and were most effective when clear communication lines between legions were available. 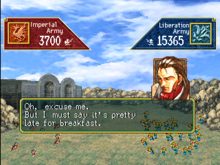 Mathiu believed in a clear divide between breakfast and lunch.

Despite this, however, he was not afraid to act on his own. For example, once suspicions that a spy had infiltrated the Liberation Army became known, Mathiu made sure that his plans became shrouded in mystery. In fact, even McDohl was caught by surprise when Mathiu announced his intention to attack the Northern Checkpoint.

However, a weakness of these strategies could be the lack of long-term planning. This showed itself most clearly with his plan for the surrender of Kasim Hazil, which involved allowing the City-State of Jowston to overrun the Senan region. Although this proved effective in forcing the surrender of Kasim Hazil, it also forced the Toran Republic to go to war with Jowston immediately after its formation, which soured relations with its northern neighbors at once.

Mathiu was also responsible for recruiting his uncle, Leon Silverberg, into the ranks of the Liberation Army, stating that he did not trust Leon, but trusted in his abilities. He also reunited with Apple, one of his students, who returned from her studies in Crystal Valley as soon as she heard that her mentor is fighting once again. 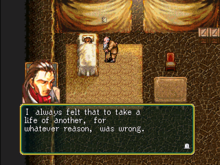 You wiped out the Northern Checkpoint for having a late breakfast.

His daring ideas and flexible decision making were also a key part of his talents. Most notable was ensuring the Liberation Army would have the naval capacity needed for the Battle at Floating Fortress Shasarazade by having the dragon Thrash use their ice breath to create 500 frozen vessels in a single night.

Following the battle, Mathiu ordered the razing of the famed 'Floating Fortress'. During the attack, he was stabbed by Sanchez and was badly wounded. Although he was seriously injured even post-treatment, Mathiu continued to push himself, causing his health to rapidly degenerate. He was determined to realize all of Odessa's hopes through McDohl.

Following the last battle, he spent his last moments in a battlefield tent along with Liukan, passing away after receiving word that the emperor had fallen, and the war was over. Even as he passed away, however, Mathiu was still plagued with doubts that his participation in the war was right.

Mathiu Silverberg can be considered one of the most influential strategists that lived on the northern continent. He not only directly participated in events and wars which would eventually lead to the formation of the Toran Republic, but also tutored students who would become renowned strategists on their own.

Mathiu was a great believer both people, and the future, which is partly why he was such an effective teacher. Shu, a student which he dismissed as he used his strategic mind for personal gain, would become the tactician of the New State Army and played an important role in the Dunan Republic later on.

Another student of his, Apple, also played a huge role during the Dunan Unification War, convincing Shu to join the New State Army and serving as secondary strategist. She would later teach Caesar Silverberg, Mathiu's nephew, in the art of war and he would quickly adapt to Mathiu's teachings. Apple also wrote a biography on Mathiu's life and took over his school in Seika after the War of the Champions. 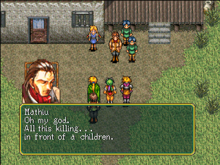