This article is about the elder Viki who appears in many games of the Suikoden series. For the younger version, see Viki (child).

Viki (ビッキー, Bikkī) is a recurring character who appears in seven games in the Suikoden series. Viki is a ditzy teleporter from another dimension who remains much of a mystery. 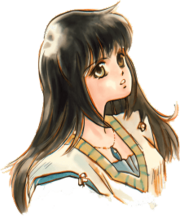 Viki is a pretty young woman with long brown (sometimes depicted as black) hair and pale green eyes. Her age is apparently locked to 16 years old, due to her teleportation being temporal as well as physical.

Her outfit across her many game appearances is broadly consistent in depicting a long, white dress with blue and yellow design tails along with a blue tabard. She accompanies this with a pair of white shoes. She usually wears a small necklace. Her Suikoden III outfit is perhaps the most different.

Despite Viki's unassuming appearance, she is a very absent-minded young lady and often makes mistakes. However, her easy-going personality and good-natured tone make her easily forgiven. Carefree, she speaks in a familiar manner to almost everyone she meets.

She is a skilled magician and a bearer of the Blinking Rune but her eccentric nature marks her as somewhat unreliable. Her sneezes often caused unpredictable results, teleporting people and items either to or away from her. One example of Viki's unpredictable nature is the existence of her younger self, who sometimes appears when Vicky sneezes. This younger Viki has a much more somber personality and is the complete opposite of Viki. The relationship between the two is unknown.

Viki's home is a mysterious place of unknown age and region. It seems that the doors of each room in this place are connected to other points in time and space, but the details remain a mystery. It may have something to do with the word "waffu..." which she occasionally muttered in her sleep. Her teleporting apparently had a destination in mind. 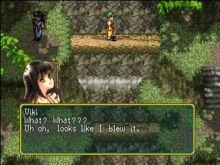 And so begins a magnificent streak of teleporting ineptitude.

Viki first appeared in the Toran region when she teleported into the Forest of Moran while McDohl and his entourage were passing through. Confused and disoriented, Viki was surprised to find out that she was in the Scarlet Moon Empire, remarking that it was "almost on the other side".

Lost and obviously out of place, Viki was taken in by the Toran Liberation Army where she helped teleport the hero's entourage where they needed to go in the Toran region. Befitting her nature, she would sometimes forget spells.

Following the end of the Gate Rune War, Viki disappeared without a trace following a failed teleportation attempt. She would end up in the Matilda Knightdom, three years later, during the Dunan Unification War. Appearing in front of the leader of the New State Army, she would agree to join the group, once again lending her teleport magic to the group. 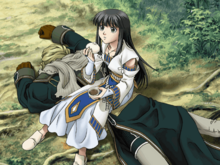 She didn't even spill that tea. What a queen

Following the end of the Dunan Unification War, Viki would sneeze during a celebratory banquet, once again vanishing in the process. According to one story, she would appear in front of Nash Latkje as he traveled to Crystal Valley.

Noticing that her friends from the New State Army, Millie and Meg were there and overhearing that they were lost, she attempted to teleport them to their destination. This would end up taking the group through a variety of times and locations. During this adventure, they would also meet a younger version of Viki, deepening her mystery further. 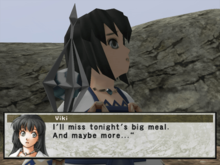 You mean tonight's big dessert too?!

Viki would next appear at the Mountain Path near the border between the Grassland and the Holy Kingdom of Harmonia, some 15 years after her last appearance. She would join the Fire Bringer, asking if she could stay with them with amazing familiarity.

Throughout the War of the Champions, she would aid the group with her blinking magic and also meet her younger counterpart once again. After the war had ended, she attempted to teleport everybody home following a banquet, disappearing herself in the attempt.

Centuries ago, she had appeared on Nay Island, again without any intention of doing so, there she met the leader of the Allied Forces and joined them on the condition that he would protect her. During the Island Liberation War, she supported her protectors with her Blinking Mirror and teleportation magic. During a post-war victory party, she disappeared with a loud sneeze.

In the past, she had also found herself in the Queendom of Falena after yet another disastrous sneeze, suddenly appearing in front of the Prince of Falena. Lost in a country she had little knowledge of, she agreed to join the Imperial City Recapture Army, using her blinking skills to teleport members of the army where they were needed, quickly and easily.

During her time with the Recapture Army, she was confronted by Lorelai, who demanded to know why Viki denying helping her and Killey escape from the Deep Twilight Ruins sometime in the past. This merely confused Viki, who apparently had not experience that event from her perspective yet, making her think Lorelai was bullying her.

Once the Sun Rune War ended, Viki ended up disappearing again with another sudden, unexpected sneeze.

Viki's theme is considered the song "Natural Naivety", which plays during her introduction at Ceras Lake in Suikoden V. Although noted as being the "Viki appearance event" theme, it is used during a number of light-hearted moments throughout the game, particularly those involving Lymsleia Falenas. The song is track 42 on disc 2 of the official Suikoden V Original Soundtrack.