Hix (ヒックス, Hikkusu) is a supporting character in Suikoden and Suikoden II who makes a cameo in Genso Suikogaiden Vol.1. Hix is a young warrior who is undergoing a trial of manhood. 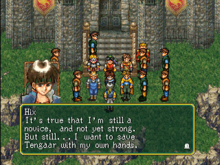 I will save Tengaar with my own hands... and five other people!

Hix is a timid young man from Warriors' Village. He and Tengaar grew up together and the two eventually became a couple.

When Neclord took Tengaar, Hix's inner courage awoke and he swore to rescue Tengaar and joined Zorak, McDohl and the villagers in storming Neclord's Castle. Hix begged Zorak and McDohl to allow him to go battle Neclord alongside them. Zorak allowed Hix to go after designating Hix as a warrior and granted Hix permission to name his sword.

Hix aided McDohl's party in combat and they proved victorious over the vampire. After leaving Neclord's castle, Tengaar and Hix volunteered to join the Toran Liberation Army. Following the end of the Gate Rune War, Hix became further accepted as a true warrior and left on a journey with Tengaar at his side.

Hix continued traveling, pushed by the tenacious Tengaar into continuing his Trial of Manhood. Eventually, they traveled to the City-State of Jowston in order to undergo the Test of the Unicorn in Kobold Village. However, when they arrived, they discovered the ritual was no longer practiced.

After spending the night in the Chief of Kobold Village's home, Hix was unable to wake Tengaar. The Kobold Chief claimed Tengaar was suffering from the Curse of the Unicorn and that the only way to reawaken her was to gather a Blue Stone, Red Flower and Green Bell and bring them to the Unicorn's tree in the Unicorn Woods.

With the help of the hero, Hix raced across Jowston gathering the items. When he returned, Hix went into the forest with the three items, where a perfectly healthy Tengaar and the villagers congratulated him for having completed the staged ritual. To everyone's surprise, the unicorn Sigfried appeared, but Hix passed the test and Sigfried disappeared after recognizing Hix as a warrior.

Hix and Tengaar joined the New State Army in order to thank the hero for his help. Following the Dunan Unification War, Hix continued his Trial of Manhood journey with Tengaar.

Hix has a tendency to be doubtful. Hix was prone to being indecisive and frequently was pushed around by Tengaar. Tengaar frequently made decisions on behalf of the couple for Hix. Despite this pushiness, however, they were said to be a well-balanced couple.

Hix frequently had doubts about his vocation as a warrior. He doubted his strength and considered himself weak and didn't practice his swordsmanship as often as Tengaar would like. Even Richmond noted that Hix seemed uninterested in becoming a warrior. However, when Tengaar was in trouble, Hix rallied his courage to protect her. Hix named his sword after Tengaar, following the tradition of Warrior's Village of naming it after the most important thing in his life.

Hix, or alternatively Hicks, Hickes, or Hick, is an Anglo-Saxon name. It is a diminutive of "Richard", giving the name the meaning of "son of Richard" over time.

Hix's sword is named Tengaar, as part of the Warriors' Village tradition of naming a sword after the person's most beloved person or possession. He first announced the name of his sword when confronting Neclord during the Gate Rune War, declaring that he would defeat Neclord in the name of his sword.