Varkas (バルカス, Barukasu) is a supporting character in Suikoden who makes a cameo appearance in Suikoden II. Varkas is the leader of the Mt. Seifu bandits and was named the Captain of the Border Guard. 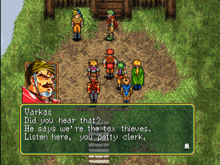 Varkas was the leader of the Mt. Seifu bandits, known as the "Whirlwind Axe", due to his battlefield prowess. He was described as a well-built man with a square, tanned face and thick eyebrows, protruding from a ridge. He was the third son of a farming family and had learned some letters and words from a priest as a youth, marking him as not completely illiterate.

He originally served as second-in-command of the bandits, under his childhood friend, Guin. However, Guin's increasingly autocratic, self-serving, and paranoid rule would lead to arguments between the two, culminating in Guin poisoning Varkas and attempting to assassinate him. Sydonia, who Varkas had been taking care of after finding him in a carriage the group had raided, would prevent the attack and with his last ounce of strength, Varkas would strike Guin down.

Varkas would draw the ire of Grady, the military commander of Rockland, who accused Varkas and the Mt. Seifu bandits of pillaging local villages and rendering Rockland unable to collect taxes. This, however, was untrue, as Varkas' Mt. Seifu bandits only stole from Scarlet Moon Empire officials and never from common citizens.

Eventually, the son of Teo McDohl would be ordered to apprehend him and Varkas and his second-in-command, Sydonia, were defeated and captured. Varkas and Sydonia were strung up on stakes to starve outside of Grady's mansion. One of the Mt. Seifu bandits travelled to Lenankamp on behalf of Varkas, asking for the Toran Liberation Army to rescue them. His previous captors, outraged by Grady's behavior, would rescue the bandits. 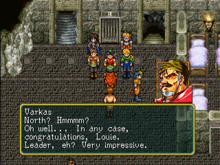 "I coulda been leader, I have experience...."

Following the end of the Gate Rune War, Varkas was named the captain of the Border Guard of the newly formed Toran Republic. During the Dunan Unification War, Varkas would encounter Sheena and the leader of the New State Army attempting to enter the Toran Republic.

As they were representing a force traditionally hostile to the republic's predecessor, the Scarlet Moon Empire, Varkas chose not to allow the group free entry but escorted the party to Gregminster.

Varkas is fought in Suikoden as part of the game's second boss battle. He fights the party alongside Sydonia. As Varkas is slightly more durable than his comrade, it is best to defeat Sydonia first, to reduce the enemy's number of actions.