Marina (マリノ, Marino) is a supporting character in Suikoden V. Marina is a hard-working maid from Stormfist whose feelings towards Belcoot are turning quite serious. 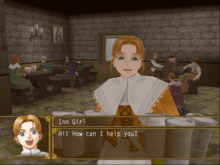 Oh great, the six flagons of mead I ordered have arrived.

Marina a cheerful young maid who works hard at the Stormfist inn, attracting customers with her pretty face and bright demeanor. She is an orphan with no living relatives, but the proprietors of the inn took her in and cared for her as their own while providing her with steady work.

She would meet Belcoot during the run up to the Sacred Games and began to develop feelings for him while he stayed at the inn. Although she rooted for Belcoot throughout the early stages of the tournament, as he approached the final, she realized that if were to win that he would marry Princess Lymsleia and be lost to her.

At the same time, a group of xenophobic thugs kidnapped Marina from the inn, hoping to force the withdrawal of Belcoot from the tournament. Belcoot, with the aid of the Prince and his companions managed to rescue Marina from her captors in the Western Woods.

However, unknown to her rescuers, while held captive, Dolph gave Marina a sample of Dark Arcanum, an undetectable drug used by Nether Gate. He convinced her to use it in order to have Belcoot fall in the final of the tournament so that he would not have to marry the Princess. So, the following day, Belcoot's stew, prepared by Marina, was laced with the drug. This caused Belcoot to be easily defeated by Childerich in the finals of the Sacred Games.

Upon his revival, Belcoot learned the truth but bore no ill-will towards Marina, as he was fully aware that she was used in a Godwin Faction plot. He argued that even if she had not drugged him, that the Godwin family would most likely have had another plan to secure their goals. Following this, Marina was given a leave of absence from her work in Stormfist.

Traveling along with Belcoot, Marina looked for work all over Falena, wishing to feel useful. Eventually, she encountered the Prince once again in Yashuna Village. There, the Prince invited the two to join the Imperial City Recapture Army; Marina and Belcoot accepted as they were grateful for all the Prince had done for them in the past. Marina decided to open an inn at the headquarters on Ceras Lake.

As she had romantic designs for Belcoot, Marina became worried and jealous when Hazuki also joined the Recapture Army and was often being curt and rude to the young swordswoman. Marina also served in other capacities as part of the Prince's army, besides being the innkeeper, Silva noting that Marina made the beds in the infirmary. Jeane also let Marina know that she was a very cute young woman along with Lu. After the Prince's forces took Stormfist, Marina returned to the inn to check in on the owners, making sure they were okay before returning to her duties.

Following the Sun Rune War, she returned to the Stormfist inn where she was noted as working so hard that there was a possibility that she might take it over in the future. Marina was also learning to be more direct with the often-clueless Belcoot, especially as Hazuki was planning to challenge him again.