Windy (ウィンディ, Uindei) is a main antagonist in Suikoden. The Scarlet Moon Empire Court Magician, Windy used her influence and her magic to hunt for the Rune of Life and Death.

Windy is a powerful magician and the last known owner of the front half of the Gate Rune. Windy gained the rune during an attack by the Holy Kingdom of Harmonia on the Clan of the Gate. Windy and her clan sister, Leknaat, divided the rune, each taking half and escaping using the Gate Rune's powers. Windy received the "front" Gate Rune before the two parted ways. This rune allowed her to bring monsters into the world.

Following this attack, Windy sank into despair, desiring to take revenge upon Harmonia, High Priest Hikusaak and the world. To that end, began to seek a second True Rune. At first, Windy went after Leknaat's half of the Gate Rune, but after this was unsuccessful, she soon set her sights on a new target, the Rune of Life and Death, which she developed an unnatural obsession with. It is her hunt for the True Rune that caused her to recreate so many times the tragedy once inflicted on her by Harmonia. 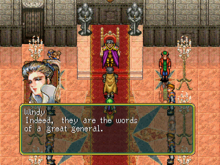 By 455, Windy was serving as Emperor Barbarosa's Court Magician (PS1)

Windy's hunt for the Soul Eater lasted for over 300 years. By SY 449, Windy had become the Court Magician of the Scarlet Moon Empire. Due to her physical resemblance to the Emperor's late wife, Claudia, Windy gained more and more power within the Empire and influence over Barbarosa, who wanted to heal the pain he could see in her eyes. Using this to her advantage, Windy used her magic to manipulate the empire, giving Conqueror Runes to the Five Great Generals and Barbarosa to keep them within her control. At this time, she also finally tracked down Ted and quickly attempted to get the Soul Eater from him. This proved unsuccessful, as Ted managed to escape and pass the rune on to its successor.

Following Barbarosa's defeat, Windy appeared before him and once more attempted to gain control of the Soul Eater. However, the Rune rejected her, shocking her greatly. Windy became even more upset as Barbarosa revealed he loved her and that he was not under her control, as his Sovereign Rune protected him from the effects of her Conqueror Rune. Taking her in his arms, Barbarosa jumped from the Floating Garden. Windy was never found after that and her whereabouts are unknown.