Vincent de Boule (ヴァンサン・ド・ブール, Vansan do Būru) is a character in Suikoden and Suikoden II who also makes a cameo in Genso Suikogaiden Vol.2. Vincent is an aristocrat prone to fanciful claims although his noble standing is called into question by some. 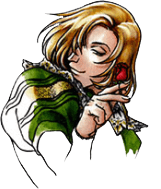 Vincent de Boule is a pale, slender man clad in an elaborate outfit befitting his nobility. In Suikoden, he wears a green tunic, embroidered with gold, with white underclothes. He also wears a red cape, white ruffle and knee-high green, gold embroidered boots.

In Suikoden II, his outfit is even more extravagant. His green outfit now consisting of puff shoulders, green and silver striped pantaloons, a large red ribbon around the waist and golden ribbons and bows tied around his white leggings and green shoes. He also wore a half-cape, emblazoned with a rose, over his right arm. 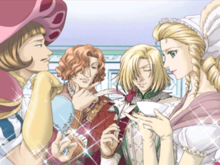 Vincent (second from the right) enjoys tea with Milich, Simone and Esmeralda.

Vincent always carried himself with poise and was rarely seen without a rose in his hand. His eccentric tone gave him a generally elusive air. Some of his actions during the Gate Rune War, such as his running out on bills and imprisonment led some to believe he was a fraudulent or self-proclaimed noble but both his inheritance and the investigations of Richmond would confirm that prior to the collapse of the Scarlet Moon Empire, he was indeed a nobleman of the state.

As a nobleman of the Scarlet Moon Empire, he was very much a soul mate of other aristocratic-inclined individuals such as Simone Verdricci, Milich Oppenheimer and Esmeralda and often took tea and chatted with them. However, it was not only people similar in manners to him who Vincent could consider a soul mate. As well as declaring McDohl a dear friend for rescuing him during the Gate Rune War, he would later consider the leader of the New State Army his bosom friend, for aiding Simone during the Dunan Unification War.

Although it may seem like Vincent dispensed this title freely, he did not, in fact, devote himself lightly. He merely had several close friends whom he held a sincere respect for. His faith in such true friends, therefore, is not shaken easily and he is sure not to betray such friendships.

Vincent was first encountered in Antei, trying to charm his way out of paying for his meal.

Vincent de Boule was a member of the Scarlet Moon Empire aristocracy. He was very much a natural noble, enjoying poetic conversations, hosting elegant tea parties and always making sure to be at the cutting edge of aristocratic fashion.

During the Gate Rune War, he first encountered the Toran Liberation Army in Antei, where he skipped out on a meal due to a claimed lack of money. He would encounter the group again at the entrance to the Dragon's Den, where he showed them a secret entrance to the guarded cave. He would later be imprisoned in Moravia and when rescued he would immediately join the Toran Liberation Army, discarding his noble status and joyfully embracing its leader as a true friend.

Although a noble, he lost his title after the Gate Rune War, when the new Toran Republic abolished the Scarlet Moon nobility. Vincent was still entitled to return home and receive his inheritance, however. After that, he would use his funds to study abroad, travelling around the world. A month before arriving in the City-State of Jowston, he would meet and become swift friends with Simone Verdricci. 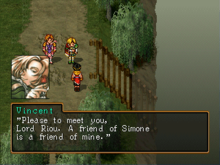 In Radat Town, Vincent searched for his dear friend, Simone.

As the Dunan Unification War raged, he would join the New State Army after hearing how its leader had helped Simone recover the Rose Brooch Vincent had given him, although he would gently admonish Simone for thinking their friendship could be broken so easily by a lost trinket.

Following the war, he intended to continue his studies in the Holy Kingdom of Harmonia. Along the way, he would stop to enjoy himself with his aristocratic friends. Nash Latkje would find himself in the middle of one of these tea parties unexpectedly, thanks to a mishap from Viki, although the intrusion did little to upset the civilized atmosphere.

Sometime later, around the year 469, Vincent would hold a beauty contest where he would award Augustine Nabor with a Rose Brooch and the two gentlemen became "dear friends".

Vincent is a male name derived from Vincentius (from the present participle of the Latin verb vincere, "to conquer or win"). His Japanese name does not use the standard katakana for Vincent (ヴィンセント, Vuinsento) instead using Vansan (ヴァンサン). This is presumably to emphasize the French accented nature of his name. Boule, meanwhile, is the French word for ball or bowl, and as a surname would have historically been used by people involved in the manufacturing of the same. Finally, "de" is a particle preceding a nom de terre in many French noble families.

In battle, Vincent wields a rapier named "Enchante" (アンシャンテ, Anshante), a French term meaning "nice to meet you" or more literally, "enchanted". The correct transcription would be enchanté, with an accent on the last e. This upgrades to "Savat" (サ・ヴァ, Sa Vua), an erroneous localization of the French word "Ça va", meaning "it goes", usually used as "(Comment) ça va", meaning "How's it going/How are you?" and as a response meaning "I'm ok.". Its final upgrade is "Felicitation" (フェリシタシオン, Ferishitashion), a form of congratulations and expression of good wishes.

Vincent's theme is the song "Theme of Narcissism". He shares this theme with Milich Oppenheimer and Esmeralda. The song is heard when first encountering Vincent in Antei, again when interacting with him at the Dragon's Den, and finally when recruiting him in Moravia.

Following recruitment, the song will play whenever the player speaks to Vincent at Toran Castle and will continue playing until the player either returns to the center of the castle or speaks with Kasios. It is song 28 on disc 1 of the official Genso Suikoden Original Game Soundtrack.

In Suikoden II, the song is remixed as "Theme of Narcissism Again". He shares this theme with fellow narcissist Simone Verdricci. It is song 4 on disc 2 of box 1 of the Genso Suikoden II Original Game Soundtrack.