Agares Blight (アガレス・ブライト, Agaresu Buraito) is a supporting character from Suikoden II. Agares is introduced as the ruler of the Highland Kingdom, although he is quickly marginalised by his son Luca Blight as part of the latter's maniacal plans. 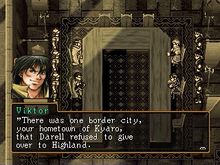 After his ascension, Agares (seated upper left) immediately pushed for peace with Jowston.

Born in 408, Agares Blight became the 22nd king of Highland at the age of 27, following the death of his father, Robert, during the Jowston-Highland war. Although not a talented ruler, he was a hopeful pacifist who disliked combat and so sued for peace, ending the war soon after his reign began. He continued to maintain an uneasy peace with the City-State of Jowston over the years.

He was married to the noble Sara by the time he took the throne in 434 and his son, Luca was born the same year. The marriage was an arranged one, although Agares still felt love for his wife. Indeed, some of Agares' desire for peace may have been entrusted to him by his wife.

In 443, nine years after Agares took the throne, the Blight royal caravan was attacked by what was ostensibly a group of bandits, although the equipment and training of the brigands indicated they were trained by Muse. There, Agares abandoned his wife and son Luca and made for the capital. Although later rescued by the Highland Army, Luca would always hold his father responsible for the events and their repercussions, including the madness and eventual death of Sara. Realising Luca's hatred, Agares would begin to gradually distance himself from his son. Meanwhile, Agares was always distant and unaffectionate with his stepdaughter Jillia, who was conceived during the violation of Sara. 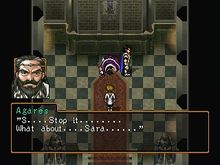 Agares struggled to comprehend the depths of Luca's hatred even as he lay dying.

Although the continuing peace agreement with Jowston was said to have regarded as his highest achievement, Agares' pacifist policies led to fierce opposition from within the military and he would later reluctantly entrust the command of the military to Luca in order to reduce the dissatisfaction of the army. Despite this, it is said that the prince was not necessarily any more talented in that area than Agares. Older generals such as Han Cunningham would continue to support Agares, while younger generals such as Seed and Culgan supported Luca and his appointment as commander of the Highland Army. Agares would devote his time to political affairs following this appointment.

By the time of the Dunan Unification War in 460, Agares found himself unable to silence the hardline factions opposed to his peaceful policies. As the war raged under Luca's direction, Luca and Jowy Atreides plotted to overthrow Agares, both for their own purposes. Nominating Jowy for knighthood led to the Knight's Oath ceremony where Agares drank the Wine of Fealty, containing the blood of the oath bearer as was the tradition. However, Jowy's blood was heavily poisoned, causing Agares to collapse in pain. Realizing what had happened, Agares spat out his protestations, trying to appeal to Luca's memories of his mother and quell his violent ambitions, which only served to enrage Luca as he recalled Agares' "cowardice". Agares soon died on the floor of L'Renouille Palace.

His delegating of military authority and the eventual war that broke out during his reign, coupled with his assassination, means that history remembers Agares as a weak-willed ruler who made the first step towards the Highland Kingdom's destruction.

Agares is the name of a Goetic demon. He is described as a duke who teaches languages, stops and retrieves runaway persons, causes earthquakes, and grants noble titles and commands either 31 or 36 legions of demons, depending on the source material.

Blight, the name of the Highland royal family, is an English word stemming from the Old Norse word "blikna", meaning "to grow pallid". It is used to describe anything that impedes or halts any aspect of life but mainly refers to plant and fungal conditions. It can also be localized as "Bright", meaning vivid or dazzling.