Belcoot is a wandering swordsman with a keen sense of justice. In his past, he was a gladiator slave, fighting for his life in the Stormfist Arena. A very poor gladiator initially, Belcoot managed to escape around SY 438, eventually fleeing the Queendom of Falena entirely.

He eventually made his way to Kanakan, where he studied the Falcon style of swordplay under the famous Roundia Haia. Upon the completion of his training, Belcoot returned to Falena in SY 449 in order to enter the Sacred Games. His goal in entering the Sacred Games was to abolish the gladiatorial system completely upon his entering the Falenan royal family. Although thankful for the steps that Queen Arshtat and Ferid had made in securing greater care for slaves, Belcoot was aware that things would revert back to their previous state should a nobleman win the tournament. 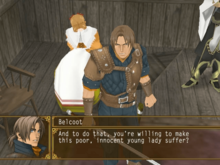 Yes, save her but maybe employ a food-taster for her meals from now on.

While staying in Stormfist, Belcoot was accosted by jingoistic and xenophobic thugs who sought to put him out of the competition after he had convincingly defeated Lord De Beers' representative, Jinku, in the opening round. With the help of the Falenan Prince, Belcoot was rescued. However, the thugs then kidnapped Marina, a young woman working at the inn in Stormfist where Belcoot stayed, who had taken a shine to the swordsman. Belcoot, with the aid of the Prince and his companions managed to rescue Marina from her captors in the Western Woods.

However, while she was held captive, Dolph had actually given Marina a sample of Dark Arcanum, an undetectable drug used by Nether Gate. He convinced her to use it in order to have Belcoot fall in the final of the tournament so that he would not have to marry the Princess, something which would have distressed Marina considering her feelings for Belcoot. So, the following day, Belcoot's stew was laced with the drug, causing him to be easily defeated by Childerich in the finals.

Upon his revival, Belcoot learned the truth but bore no ill-will towards Marina, fully aware that she was used in a Godwin plot and that even if she had not drugged him, that the Godwin family would most likely have had another plan to secure their goals. Following this, Belcoot accompanied Marina on her travels after she was given a break from her work in Stormfist. Eventually, Belcoot encountered the Prince once again in Yashuna Village. There, the Prince invited the two to join the Imperial City Recapture Army and grateful for all the Prince had done for him in the past, he agreed.

Later, Belcoot would admit that he was surprised that he had progressed as far as he had in the Sacred Games, noting that if Richard had not been drugged in his opening match that he would have been unlikely to have progressed past him. He encountered an old rival, Hazuki, much to the frustration of Marina who viewed her as a rival for his affections. Marina was rather less annoyed with Belcoot training with a male partner, Dinn, as the two could often be seen training together.

Following the end of the Sun Rune War, Belcoot became a teacher at the Recruit Training Academy in Stormfist, while also helping Marina in her inn as their relationship continued to grow slowly, thanks to Belcoot's inability to catch on to Marina's obvious affection for him.

Belcoot is named after the Berkut, a Soviet surface-to-air guided missile deployed for much of the Cold War. The name Berkut (Беркут) literally means "golden eagle".

Belcoot's weapons Akatsiya (アカツィア), Giantsint (ギアツィント) and Gvozdika (グヴォーツィカ) are the Russian names of the Acacia, Hyacinth, and Carnation, respectively. These flowers were also the namesakes of the Soviet tanks 2S3 Akatsiya, 2S5 Giatsint-S, and 2S1 Gvozdika.