Clive (クライブ, Kuraibu) is a supporting character in Suikoden and Suikoden II who also appears in Genso Suikogaiden Vol.1. Clive is a Howling Voice Guild agent who pursued Elza throughout several lands.

Clive a top-class gunner of the Howling Voice Guild. He is in pursuit of Elza, who escaped the organization's grip and killed Kelley, whom he loved like a brother. The gun he carries, Storm, is a special gun and is a sign that he is to head the guild. 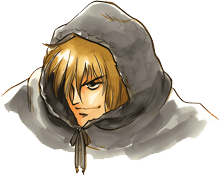 Clive was a stern looking man with blond hair and black eyebrows. He wore a large black, hooded cloak which usually concealed most of his body, and his gun, Storm. In Suikoden II, he wore a green short-sleeved shirt and khaki pants beneath his cloak, as well as green boots and a single black, fingerless glove on his left hand. He almost always wore his hood up.

Kawano Junko intended her design of Clive to look wild, but felt that with his concealing cloak it was perhaps difficult to tell. The "Clive Quest" of Suikoden II was originally planned to be included in Suikoden. However, Murayama Yoshitaka would delay the implementation of the plotline due to the Howling Voice Guild's scale and importance as a guild of gun wielders in a world mostly without firearms.

Clive's means of support were Kelley, Elza, and his life in the Howling Voice Guild. To be denied that life by what had happened between Kelley and Elza filled Clive with a rage that fueled his obsession with tracking down and punishing Elza. Ruthless, he had little hesitation in threatening or shooting anyone who would obstruct his pursuit. 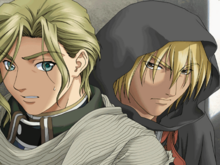 I know all your secrets, hiss

He knew Nash Latkje from his time in the Howling Voice Guide and disliked him, even though his death sentence for leaving the guild was postponed indefinitely.

He did not open up to anyone else. During his time in the Toran Liberation Army, he distanced himself from his colleagues and had little interest in their goal. Even though he had some gratitude towards the hero's help during the Dunan Unification War, he still kept his thoughts to himself for the most part. When Elza fell, however, Clive unleashed his grief and sadness at everything that had happened. 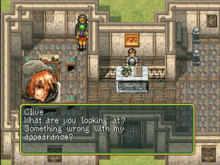 You are literally screaming for attention, my friend.

Clive is a knight-class gunner of the Howling Voice Guild, skilled in the secret techniques of gunpowder. Picked up by the organization at a young age, Clive underwent rigorous training and was raised to be a loyal combatant and officer of the guild.

Highly reticent, he traveled to the Scarlet Moon Empire in pursuit of a mysterious woman, who had killed the leader of the Howling Voice Guild, Kelley, their best friend and comrade, before fleeing. Encountering the Toran Liberation Army in a chance encounter at the inn in Rikon, Clive would agree to join in hopes of getting clues that would lead him to her.

This search proved mostly fruitless, however; the only clue he found was a grave in Rockland, allegedly of a woman who died on a street. He was not fooled by this attempt to dissuade him in his hunt, however, and instead renewed his vow to find her. His ability to provide accurate, devastating attacks from a distance in battle greatly served the Liberation Army.

Ever on the hunt, by the time the Gate Rune War was over, Clive had left the Liberation Army and simply resumed his quest. 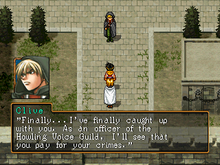 I don't have to say anything, cop

Later, he participated in the Dunan Unification War, continuing to gain information about Elza. He caught up to her in Muse City but the fugitive managed to escape, using the hero as a shield to cover her fire. He would also encounter Nash Latkje, whom he disliked, in the city, warning him to watch his back.

From there, Clive would pursue Elza to South Window City only for him to lost her trail. He knew she had gone to Lakewest, but without a ship had no means to pursue her. He would once again meet the hero and, upon learning that he had access to a vessel, agreed to aid the New State Army in return for travel. 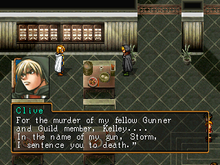 All right, Judge Dredd, reign it in a little

In Lakewest, he would receive a taunting note from Elza, while in the Forest Village, he would mistakenly confront a woman Elza had paid to disguise herself as his target. He was also one step behind in Rockaxe, but learned her next location; Radat.

As the war continued, Clive showed off the power of his gun, Storm, whose embedded soul and technological advantage allowed him to overwhelm the enemy. In Radat, he finally managed to confront Elza and the two engaged in a duel. However, at Elza's command, Storm refused to fire and Clive was wounded in turn, shot through the shoulder and leg. He would survive thanks both to Elza's deliberate avoiding of vital organs and the intervention of Dr. Huan, sore and shocked.

Confronting Elza at Jowston Hill, Clive was unable to get her to reveal why she had spared his life. She set the stage for their final confrontation, Sajah Village, a small village on the northwestern frontier of the Highland Kingdom, before leaving. Clive's gun once more refused to fire as she walked away. 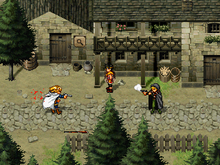 At the end of the war, Clive would finally meet Elza for their final confrontation in Sajah Village. The two Guild members had a graceful duel. Both would fire their shots, but only Elza fell, as she had planned all along. On the verge of death, Elza told Clive the truth about the death of Kelley and the manipulative forces behind it all, how Kelley and Elza had been forced into a duel, how Kelley had allowed himself to be killed, and how Clive was chosen to cover it all up.

After a respectful burial for the woman he hunted, Clive returned to the Guild and took the position of Guildmaster. Whether Clive accepted the necessity of the deaths of his friends, or if he intended to reform or challenge the guild as its leader is known only to himself.