Sasarai (ササライ, Sasarai) is a minor character in Suikoden II and Genso Suikogaiden Vol.2 and a major one in Suikoden III. Sasarai is a bishop within the Holy Kingdom of Harmonia. Sasarai is the bearer of the True Earth Rune and is loyal to Hikusaak, the High Priest of Harmonia. He has participated in several wars as a general. 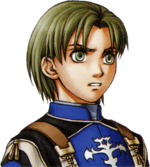 Like his brother, Luc, Sasarai has green eyes and brown hair that reaches his shoulders. At 166 centimeters (about 5’5”), he is a little shorter than average. His build is on the thin side of average.

Sasarai is always dressed in a Harmonian bishop’s uniform, but his uniform's appearance differs with each game. In Suikoden II, he wears a blue robe with white trim and the Harmonian insignia on the front and a large bishop’s hat with the same insignia. In Genso Suikogaiden Vol.2, his hat is smaller, and he also has a short, dark blue cape draped about his shoulders. In Suikoden III, he does not wear a hat, and his robes have been replaced with a blue shirt with white trim with the Harmonian insignia on the front and white pants.

In Genso Suikogaiden Vol.2, he can be seen with a ring on the middle finger of his right hand. In his Suikoden III artwork, he is shown to have one on the left hand as well. His weapon is a ring called “Guardian Eye,” so these may be to enhance his magic.

Although Sasarai is a skilled general, he is also a very kind person who dislikes violence, and he has a strong sense of justice. His subordinates place a lot of trust in him. In turn, Sasarai is loyal to Hikusaak and his convictions.

Sasarai is also intelligent and capable of great cunning. An example of this is when, in the aftermath of the Dunan Unification War, he worked behind the scenes to help Lena Suphina save Nash Latkje's sister, Julie. He knows when to question others as well, such as when he suspected Luc (disguised as the Masked Man) had ulterior motives for wishing to serve Hikusaak.

Although Sasarai appears to be formal and fastidious, this is due to his attendants helping him out. He’s actually very nonchalant.

Sasarai was created in SY 444 along with his brother, Luc, as a clone of Hikusaak and a host for the True Earth Rune. He was raised in the One Temple as a bishop and was kept ignorant of his true nature. At some point in his childhood, he and Luc were involved in some sort of incident at the temple. It appears they saw each other when Leknaat appeared to take Luc away from the temple but the exact details are unknown. Sasarai did not have many friends in his life, but his sub-Commander Dios tried his best to fulfill the role and look out for Sasarai's well-being when he could.

Involvement in the Dunan Unification War 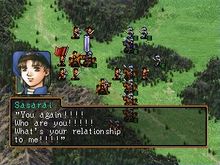 Sasarai finds himself attacked by Luc during the Dunan Unification War.

During the Dunan Unification War in 460, Sasarai was sent to aid the Highland Kingdom in the conflict. At first, he was calm and effective as an ally, but he would begin to feel uneasy due to Luc's presence among the New State Army. Later, Luc confronted him directly on the battlefield, devastating Sasarai’s troops with a powerful spell. Although Sasarai demanded to know what connection Luc had to him, Luc refused to answer Sasarai’s question. Sasarai managed to escape Luc’s attack using his True Earth Rune and did not reappear during the war.

Following the war, back in Crystal Valley, Sasarai discreetly assisted Lena Suphina in saving Nash Latkje’s younger sister, Julie, from Zaj Quiroz. This would not only help keep Harmonia politically stable; Zaj's schemes would have culminated in an attempt to bring down the government, it would also cause Nash to owe a favor that he would have to pay back himself.

War of the Champions 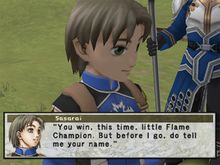 Following the Dunan Unification War, Sasarai continued to serve in the Harmonian army.

During the War of the Champions, Sasarai would lead the Harmonian army in their attempt to crush the Flame Champion and recover the True Fire Rune. Around the same time, he appointed Luc as a bishop under Hikusaak's orders, although he was unaware at the time that the Masked Man was Luc. He still had his suspicions, however, noting the specific pledge that the Masked Man made.

After Harmonian forces annihilated the Safir Clan, Sasarai led the army into the Chisha Village, where he met Hugo, who managed to stall the Harmonians by claiming to be the Flame Champion. The invasion was temporarily repelled when Karayan reinforcements came. Similarly, an attack on Brass Castle on the frontier of the Zexen Federation was thwarted by various members of the Fire Bringer.

When Sasarai was admitted into the ranks of the Fire Bringer, he supported the Flame Champion to his utmost and met many different kinds of people. However, the presence of ninjas Watari and Ayame astounded him, as they used Kage techniques familiar to him, although he was sure the group had been disbanded with the fall of Highland. 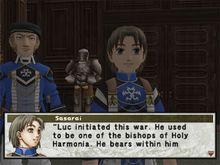 As the War of the Champions raged on, Luc would infiltrate the One Temple and reveal that Sasarai was created as a clone of Hikusaak and given the position as bishop to keep him close. After losing his True Earth Rune to Luc, Sasarai would look to ally with the Fire Bringer in order to prevent Luc’s destructive plan from coming to fruition. Although upset violently by the revelations of his creation, Sasarai held fast to his beliefs in order to avoid the catastrophic destruction Luc would have caused.

At the Ceremonial Site, Sasarai confronted Luc for a final duel, which he lost. However, Luc spared Sasarai's life, telling him that while he hated Sasarai more than anyone else, he could also empathize with him.

Following Luc’s defeat and with his True Earth Rune regained, Sasarai would return to service as a bishop within Harmonia but continued to be plagued by existentialist doubts regarding his being.

Sasarai’s weapon is called a “Guardian Eye,” which may have something to do with the eye-shaped monsters called “Guardians” that patrol the “Grey World” that Luc sees in his vision. Its name stays the same regardless of how much it is sharpened. Luc has the exact same weapon, so it’s possible that such rings are routinely given to bishops.

The Guardian Eye serves as a medium in place of a staff and is both expensive and precious.