Odessa Silverberg (オデッサ・シルバーバーグ, Odessa Shirubābāgu) is a major character in Suikoden. Odessa is the leader of the Toran Liberation Army whose strength and ideals inspired the Liberation Army throughout the war. 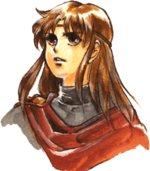 Odessa is a young woman with long brown hair and hazel eyes. As the leader of the Toran Liberation War, she wears a grey tunic fitted to her waist by a brown corset. Under this she wears white leggings, and her outfit is accented with brown gloves and boots. To complete her outfit, she wears a red cape as well as a small circlet around his head.

In her youth as an Imperial noble, she seems to have mainly worn long dresses. In battle, Odessa wields a common bow, holding it in her left hand, marking her as right-handed.

Odessa was noted for her tenderness and strength, as well as her determination never to turn her back on those who needed aid. These attributes drove her to fall for Achilles and, later, Flik. These attributes bolstered her reputation with those sympathetic to her cause.

As leader of the Toran Liberation Army, she garnered support and sympathy from scores of people suffering under the Imperial regime. She rarely confided in people as she felt she needed to maintain a certain aura as the leader of the liberation movement. That said, she had an open-heart and was very trusting of people. Flik would even claim she could be overly trusting.

She was also capable of holding a grudge. Her split with her brother, Mathiu, was acrimonious and even when she entrusted McDohl to him for help, her words indicated that she never fully forgave what she condemned as his cowardice. 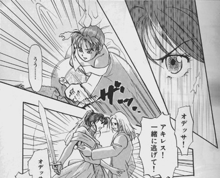 I now pronounce you man and wife. You may now slice through the wedding reception.

Odessa Silverberg is the founder and original leader of the Toran Liberation Army. Despite her birth into an aristocratic family, Odessa developed a sincere concern for how people were suffering under the corruption of the Scarlet Moon Empire after meeting Achilles, who was involved in an anti-imperial movement.

She was once close with her brother, Mathiu, even being tutored in military strategy by him. However, her entry into sedition led to a falling out between the two, Odessa believing him to be a coward for turning his back on suffering and refusing to use his considerable talents, with the two never reconciling. Odessa eventually became Achilles' fiancée and joined the movement, helping him raise a war orphan named Michel.

Achilles was arrested on trumped-up charges of fugitive-harboring due to his role in the anti-imperial movement. Odessa attempted to save her fiancée; demanding Achilles evoke his "last rights" to marry Odessa before his execution. Granted the final request, she would stage a daring escape attempt on the wedding day, fighting through Imperial soldiers clad in her wedding dress, wielding a sword.

Tragically, Achilles was felled by Imperial archers in the attempt. Odessa managed to escape and founded the Toran Liberation Army with the express goal of opposing misrule and overthrowing the Imperial regime, beginning the Gate Rune War. 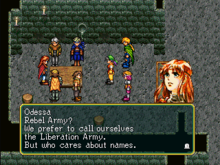 We're not like those splitters in the Liberation Front!

Over the next two years, the Liberation Army grew in size. Odessa laid the foundation for future strategies years in advance, including the building of the Secret Factory as well as the purchase of the plans for the Fire Spear.

As the leader of the Liberation Army, Odessa was a symbol of its ideals, being idolized as its "star of hope". Although one of many rebel groups operating in the Empire, she would cooperate with other groups, such as Zella's willingly. Over time she would fall in love with Flik, the two having a strong relationship. In order to maintain her status as a strong leader, she rarely confided in people.

Operating out of the Liberation Army headquarters in Lenankamp's sewers, Odessa would first meet the hero after Viktor brought him to the sewers following his escape from Gregminster. Although open to having him join, she did not pressure him but did encourage him to think for himself and to take responsibility for his actions, such as the capture of Varkas and Sydonia.

Odessa herself would take an active role in missions, traveling to Sarady to deliver the Fire Spear plans. On the journey, the party would be successfully mugged by Ledon, with only her reputation as the Liberation Army commander saving her from being robbed. Odessa would ruefully comment that perhaps she trusted people too much. 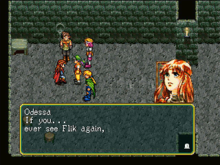 ...tell him he can keep that CD he borrowed.

While away on this mission the Liberation Army's hideout was attacked by Imperial soldiers, after being tipped off by their informant. Returning during the attack, Odessa was killed while protecting a small child. Before she died, she requested that her body be thrown into the sewers to avoid spreading the news of her death, which she believed would affect the morale of the movement.

After her death, Odessa's wishes were followed and her body was disposed of in Lenankamp's sewers, closing the curtain on a brief, but intense life. She would be succeeded in leadership of the Liberation Army and although rumors of her disappearance would begin to circulate, her death only became public knowledge following the Battle at Pannu Yakuta Castle after the Liberation Army had grown to a point that the lie was no longer deemed necessary.

Odessa's ambitions would be realized when the Liberation Army finally overthrew the Imperial regime, establishing the Toran Republic.

Odessa is the name of the third-largest city in Ukraine and was also a prominent city in the former Soviet Union. The city, in turn, was named after the ancient Greek city of Odessos, which was mistakenly believed to have been located where the modern Odessa now lies. Silverberg, meanwhile, is a German and/or Yiddish surname, meaning 'silver mountain'.

Odessa's bow names are simple descriptors and are shared with Ted. This is as they are stated to be common, mass-produced bows and are difficult for blacksmiths to work with. 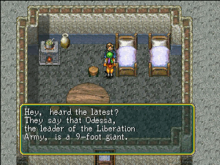