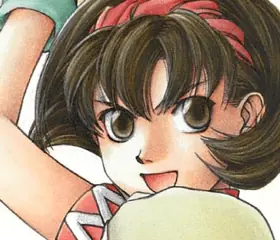 She was adopted by Genkaku and raised together with the hero. Often rash and impulsive, although she is close to her brother, she is troubled by the fact that the only family she has has thrown itself into the middle of an escalating war. She wants only one thing, a peaceful life with her brother and Jowy.

Nanami has short brown hair, pulled back with a pink headband, and brown eyes. Her torso clothing is pink, with cream-colored shoulders. She wears pale blue pants and brown shoes, as well as white gloves. She also has a white sash around her waist, accented with pale blue.

A soldier at Muse City once described her, rather unkindly, as a pug-nosed, whiny, frog-faced tomboy. Still, Sheena held something of an interest in her, indicating that perhaps the soldier was not critiquing her appearance in good faith. 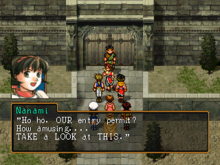 A bubbly young tomboy, Nanami believed herself capable of acting ladylike, but was more frequently considered a child. She expressed her emotions with her whole body, making her very easy to read. Nanami was also a terrible liar and actress, completely unable to fool the guards of North Sparrow Pass and Muse City when attempting to pass through their checkpoints.

Trained by Genkaku, Nanami was a talented martial artist with a strong work ethic, training during the Dunan Unification War through the night. Nanami boasted such skill that even the hero himself had never won a practice round with his adopted sister (Though it seems likely that Nanami dismisses 'unlucky' losses). Nanami used her skills to try to protect her brother, escorting him on missions to keep him safe even with professional soldiers and mercenaries such as Viktor and Flik by his side. 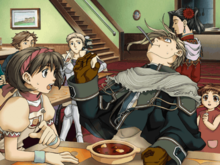 How was she to know Nash was allergic to garbage food?

Nanami was a great fan of cooking, despite her own mediocre talent. She attempted to make a meal for Nash Latkje while in Muse City, to thank him for finding a lost Pilika. The ensuing meal knocked Nash out instantly, forcing him to retire to bed. To the amazement of many, the hero was a fan of Nanami's meals, having grown up eating them.

As schooling and formal education were normally reserved for the wealthy and privileged in both Highland and Jowston, she admired schooling to an extent and was very excited to attend the New Leaf Academy during the infiltration of Greenhill City.

Nanami got along well with Apple, both due to her educated nature and their shared experience of being outsiders within the City-State of Jowston. She was also very protective of Pilika, treating her as family, partly due to Pilika's bond with Jowy. She held a certain apathy towards Shu and other leaders, for what she saw as their pressuring her brother into fighting. 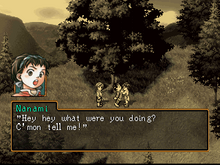 We were just talking to our demonic squirrel friend

Nanami is a boisterous war orphan who was adopted and trained in martial arts by Genkaku, along with the hero. Although they are not related by blood, the bond between the orphans was said to be even stronger than that of family. She always considered herself the older sister, despite neither sibling knowing their true age.

Despite the distance of the townsfolk, Nanami and the hero enjoyed a happy childhood, becoming close friends to Jowy Atreides. At the same fair where the hero got his signature circlet, Genkaku had bought Nanami a straw hat. However, she promptly ate it due to hunger.

When Jowy and the hero signed up for the Unicorn Brigade, Nanami remained in Kyaro Town, taking over the upkeep of the family dojo. She had hopes of one day reopening the dojo with herself as the instructor, taking after Genkaku. 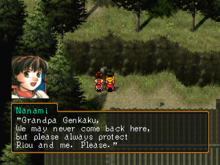 She was worried when she heard that the Unicorn Brigade had been wiped out, but never doubted that her brother would be okay. When the hero returned, now accused of having been a spy in the massacre of the unit, Nanami immediately fled without hesitation with him to the City-State of Jowston.

Nanami joined Viktor's mercenaries along with the hero. When Jowy was captured during a reconnaissance mission in the Highland camp on behalf of Muse City, Nanami decided to be the first to greet him when he returned. As the sun set on Muse, Nanami and the hero reminisced with each other about Jowy and growing up together. She would be overjoyed by Jowy's return. 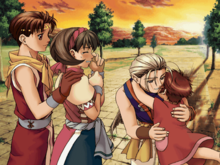 It's okay, Nanami. Maybe next time he won't come back

After having witnessed the atrocities of Luca Blight in Toto Village and the death of Anabelle, Nanami began to long to run away from war and live a quiet life, rebuilding the dojo in Kyaro Town. Nanami took Jowy's betrayal and murder of Anabelle particularly hard, at first believing her friend incapable of doing such an act. She dismissed thoughts of running away as she was unwilling to leave the hero or Jowy behind.

However, Nanami instead became more embroiled in the war when the hero became the leader of the New State Army. At first unwilling to accept that her brother was the one to take this role on, Nanami remained protective of him and accompanied him on missions in Greenhill City, the Matilda Knightdom, Muse City, and Tinto Principality.

Tear his eyebrows off, Nanami!

In Tinto City, she and her brother would be confronted by Jess, who accused them of murdering Anabelle and continuing to conspire against the City-State. Knowing everything the hero has sacrifice and fought for, Nanami was deeply upset by these accusations and his lack of reward for everything he had done. In the aftermath, she finally directly asked him to run away with her, forsaking the war to live in peace.

Nanami's dilemma would come to a head in Greenhill Forest during the New State Army liberation of the city. Meeting Jowy, she would ask him to stop fighting, knowing that her brother could not. Jowy rejected her plea, stating that he had people and beliefs he was fighting on behalf of also. Nanami begged to go back to the way things were, but her pleas only echoed in the forest. 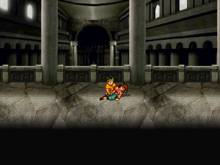 During the capture of the Matilda Knightdom, Nanami once more tried to convince Jowy and the hero to stop fighting one another. As she pled her case, she was seriously injured in an attack by Gorudo's archers. As the hero attempted to shield her, Nanami realized that she was putting him at risk because he was willing to die to protect her.

Knowing that he would need a home after the war, Nanami decided to return to Kyaro and wait for him, trusting Shu to tell him when the time was right. Following this, Shu and Huan would announce Nanami's death to the army, allowing her to return to Kyaro in peace.

After the Dunan Unification War, Nanami reunited with her brother and Jowy, her one wish and hope during the war, and happily set off on a journey with them. 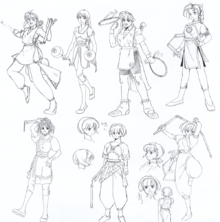 The name Nanami is a popular feminine Japanese name which can have different meanings depending on the kanji used. Early in development, a long-haired design for Nanami was considered. Her design was intended to make her instantly relatable as an older sister.

Nanami's weapon is a three-sectioned staff. It was decided that it should be a Chinese-style bludgeoning weapon to match those of the hero and Jowy. Her three-section staff consists of three evenly sized poles connected by chain. The three-sectioned staff uses the principle of leverage, which means that even someone physically weaker, like Nanami, can cause great damage.

Nanami's battle stance, which involves her standing on one leg, allows her to move quickly towards her opponent at a moment's notice. Her outfit was also designed to allow her to move easily.

Nanami's theme is the song "Beautiful Morning". The song is first heard when the player reunites with Nanami in Kyaro Town near the beginning of the game and will frequently play during light-hearted scenes involving Nanami, especially in the early portions of the game. It is song 19 on disc 1 of box 1 of the Genso Suikoden II Original Game Soundtrack.

While not related to Nanami, the song ends up being reprised as part of the song "At the Inn", a Middleport inn event track used in Suikoden Tactics. This song is track 24 on disc 1 of the Rhapsodia Original Soundtrack.