Tengaar (テンガアール, Tengaāru) is a supporting character in Suikoden and Suikoden II. Tengaar is a headstrong woman from Warriors' Village who was nearly forced to marry the vampire Neclord.

Interview with a Vampire

Tengaar is the daughter of Zorak, the leader of Warriors' Village. Tengaar grew up with Hix and eventually the two would grow from childhood friends to become lovers. 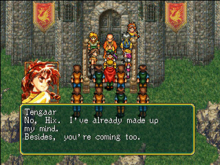 Start as you mean to go on, I say.

She grew up to have a bright and cheerful personality, although it was sometimes tempered by frustration at Hix's indecisiveness when compared to her own forward nature. Although she may sometimes appear firm, deep down she deeply loves Hix and will not hesitate to defend him if need be.

Tengaar was kidnapped by Neclord, who planned to make her his bride. Hix set out to free her and with the help of the Toran Liberation Army succeeded. Following the battle, Tengaar, along with Hix, joined the Toran Liberation Army. During her time under Neclord's imprisonment, her belief that Hix would come to rescue her never wavered for a moment.

Following the end of the Gate Rune War, Tengaar finished her service in the Liberation Army and accompanied Hix on a journey (or to be precise, dragged Hix on a journey) in order to help him in his coming-of-age ritual.

The Test of the Unicorn 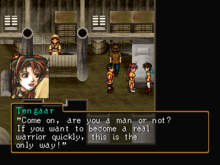 It takes two to converse; one to talk and one to listen.

Tengaar and Hix eventually travelled to the City-State of Jowston in order to undergo the Test of the Unicorn in Kobold Village. With the help of the leader of the New State Army, Tengaar and Hix underwent the trial.

Thanks to the help of the Kobold chief, Tengaar and the kobolds were able to orchestrate a fake curse for her to fall under in order to encourage Hix to undergo a 'trial'. In the end, the unicorn Sigfried appeared before them and recognized Hix as a warrior.

Though their reason for coming to the City-States of Jowston was complete, Tengaar and Hix joined the New State Army in gratitude. Following the end of the Dunan Unification War, Tengaar continued to journey with Hix while waiting for him to propose.