Regarded as one of the world's greatest swordsmen, Prime is a wandering swordsman who has participated in many wars over the years. He is perhaps most infamous for his role in the murder of the Queen of Falena. 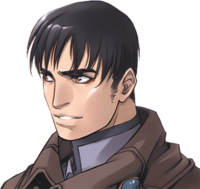 In his younger days, Georg cut a dashing figure with his dark hair and amber eyes. During his time in the Scarlet Moon Empire, his hair was unkempt but Suikoden V onward, his hair is cut shorter and kept much more neatly.

As a Queen's Knight, George wears a custom circlet with cloth covering his left eye. Prior to that, as one of the Scarlet Moon Empire's Great Generals, he wore a more standard eyepatch. Despite this, he had use of both his eyes, as shown plainly in Suikoden II.

In Suikoden V, his sword has Falenan designs on the scabbard and handle, making it appear like a normal, albeit large, sword, but it is a broadsword. He wore a variant of the Queen's Knights uniform; black clothing with gold trim worn over white underclothing. He also wore red eyeliner as part of his Queen's Knights regalia.

Following his escape from the Sun Palace, Georg wears a more familiar outfit that he would continue wearing into Suikoden II; a billowing brown cloak over dark underclothes.

George Prime was a fierce swordsman who made a name for himself all over the world. He was known as "Deathblow Georg" due to his battlefield prowess. He was also known for his sincerity and alacrity, as well as his trustworthiness. He was a close friend of Ferid for many years.

Though he wore an eyepatch for a time to remind him to not become complacent on the battlefield, he never truly moved as if he were compensating for a lack of eyesight, something that would catch Oboro's attention during the Sun Rune War.

Despite his personal power and skill, he had no desire to seize any kind of political power or leverage over others. He much preferred to live his life as a free spirit who traveled as the wind blows.

That said, he was willing to take on personal responsibility when a situation called for it. He agreed to become a member of the Queen's Knights in Falena at the behest of his friend, Ferid. Georg would claim this was due to his debt of gratitude but in all likelihood, he would have helped Ferid as a friend, debt or no debt. His involvement in the Queen's Assassination was also a pivotal moment of him putting duty and loyalty over his own whims.

Over the course of the Sun Rune War, he would become protective of and close to the Prince of Falena, even inviting him to travel together after the war. He would ask the Prince if he harbored a grudge over Georg's killing of his mother but said it without guilt or remorse. He had a fiery friendship with Sialeeds and her betrayal and subsequent demise hit him hard.

George had something of a sweet tooth, especially for cheesecake.

Born in the year 420, his birthplace unknown, the earliest records of Georg Prime place him fighting alongside respected friend, Ferid, as a mercenary prior to the year 446. 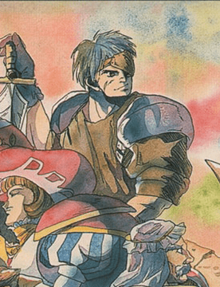 Sadly, Georg Prime was not granted a fancy hat to cover his mess of hair during the War of Succession

During a particularly fierce battle, Georg made the error of lowering his guard on his left side, allowing an enemy soldier to inflict damage to his eye. Although Georg's life, as well as his eyesight, was saved by Ferid's quick intervention, following the incident, Georg took to wearing an eye patch over his left eye, to remind himself of the price of overconfidence in battle.

Records of Georg Prime's movements following this battle are non-existent up until the year 446, where the warrior, already gathering fame for his abilities, aligned himself with Barbarosa Rugner in the Scarlet Moon Empire's War of Succession. Georg's ability in battle led him to be titled as one of the nation's Great Generals. Although Prime left his position, and Scarlet Moon, following the war, his promise to Barbarosa fulfilled, his fame still lingered in the area.

From here, records are patchy, although it is known that between the years 446 and 449, Georg traveled to the Grassland, where his skill with a blade earned him another title, Knight of the Ebony Moon.

By the year 449, Georg Prime resurfaced again - this time in the Queendom of Falena. He became one of the nation's elite Queen's Knights, under the invitation of his old friend and Queen's Knight Commander, Ferid. By this time, Georg's skills were refined to the point that it was believed that no Queen's Knight, with the possible exception of Ferid, could contest with Prime in a battle without the use of runes.

Unbeknownst to most everyone else, Georg had been summoned to Falena by Ferid for a specific reason. If his wife, Queen Arshtat Falenas, were to fall irreversibly under the influence of the Sun Rune, Georg was to murder her in order to prevent the possibility of a recurrence of the Lordlake Uprising; Either on the same, or a much larger, scale. Eventually, this came to pass with the Falenan Godwin Faction's coup on the royal palace. With Ferid killed, Arshtat now had no checks on the rune's influence, forcing Prime to kill her by running his sword through her back.

Following the deed, Georg attempted to escape the Sun Palace, presumably to flee the country. However, he encountered the Prince of Falena, his bodyguard Lyon and Arshtat's sister, Sialeeds and decided to accompany them, helping them to escape Sol-Falena. As the murder of Arshtat was witnessed by several Godwin soldiers, Nether Gate assassins as well as Queen's Knights Galleon and Miakis, it was no surprise when the Godwin administration placed a bounty on Georg's head for the murder of Arshtat. Although friends and allies assumed Georg's innocence, Prime himself never attempted to exonerate himself of any guilt.

His status as a fugitive and reputation in tatters, Georg remained undercover for much of the Sun Rune War, aiding the war effort in ways other than wielding his sword such as performing low-profile tasks like assisting in the evacuations of towns when need be as well as gathering mercenaries. Early in the war, he also traveled to Sable in order to keep an eye on the Armes Southern Mountain Corps.

Georg eventually returned to the base of the Prince's headquarters at Ceras Lake, intending to report on his activities to strategist Lucretia Merces. However, he was confronted by Queen's Knight Miakis, who had recently joined the group. Firmly accused of the murder of Arshtat by a loyalist witness for the first time, Georg left the headquarters without saying a word.

While faith in Georg Prime's motives were shaken by the accusation, many in the loyalist army held the view that the situation could not have been as simple as Miakis had stated. Therefore, Galleon's explanation of the full sequence of events was met with great relief by all concerned. However, Prime himself did not rejoin the loyalist forces in full capacity until after he helped free Gordius from control of the Godwin Faction, detaining a messenger of Dolph's who was to order reinforcements to come to Gordius to capture the Prince and his companions.

In the closing stages of the civil war, Georg escorted Zweig's group through the Sindar ruins located in the far northern Ashtwal Mountains, his swordsmanship helping to protect his group from the monsters that roamed within.

Return to the North

Following the war, Prime made the decision to leave Falena, stating that his crimes would not allow him to stay as, after all, he had indeed murdered the Queen of Falena. Removing his eye patch, his comrades were shocked to discover that Georg had the use of both his eyes, although there were clues beforehand that this was the case. Leaving Falena, Georg returned to the northern continent where he continued to make his way as a soldier, earning more fame and titles. 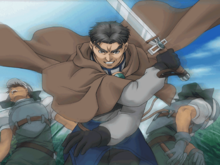 Sometimes he stops to help, just to prove to everyone he's still the man

Nothing is known of Georg's deeds until ten years later, in the year 460, when he traveled to the City-State of Jowston just as the Dunan Unification War began in earnest between Jowston and Highland. Located in Muse City at the time of the Highland occupation of the city, it was Georg Prime who helped the doctor, Huan, escape the city, allowing him to journey freely to South Window.

Traveling west, he would be in the vicinity of Greenhill City during the Highland Army attack there. He would stop to aid Nash Latkje's attack on the Highland camp, cutting through a group of soldiers with ease before leaving.

Never give up. Trust your instincts

Prime later encountered the leader of the New State Army, in Lampdragon Mountain, the border pass between Two River and Tinto. There, he agreed to fight for the hero's cause as long as he never gave up his own. As skilled as ever, Georg proved to be a valuable officer on the battlefield for the remainder of the war. Whereas in Falena, Georg was seen as a man with a sense of humor, by this time Prime was a much more serious man, prone to speaking on virtue and determination. His one real quirk remained his passion for cheesecake.

With the Dunan Unification War over and his agreement with the hero fulfilled, Georg Prime vanished once again without trace, his current whereabouts unknown.

Georg is the German or Scandinavian form of George. The origin of the name lies in Greek, derived from γεωργός (geōrgós) meaning farmer. His Japanese spelling implies that the name is pronounced in the German and Scandinavian way ([ɡeːɔʁk]), whereas the voice actors of Suikoden V pronounce it the English way ([dʒɔː(ɹ)dʒ]). Its popularity as a name comes from the myths about St. George, who is known as a dragon slayer in Christian mythology.

Prime is an English adjective for first in an order or of highest importance, stemming from Latin primus meaning first. As such, it is an attribute widely used in a lot of fields, such as mathematics (prime numbers) or music (the prime being the tonic/key note of a musical scale). Georg is one of the few characters in the Suikoden world to have a last name which shows his high social status he gained as a warrior throughout the years.