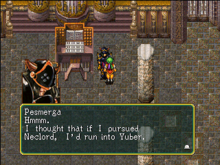 Pesmerga is a mysterious warrior, whose origins are unknown. His detached personality and first-class fighting abilities has only enhanced his mystery and it is not known if Pesmerga is even human. His only known goals or motives is to settle his business with Yuber.

Pesmerga was encountered by the Toran Liberation Army on the top floor of Neclord's Castle. Pesmerga explained he was hunting Neclord in the hope that he would lead him to Yuber. Pesmerga agreed to join the Liberation Army, reasoning that Yuber was now working for the Imperial Army.

Wielding a large two-handed sword in battle, Pesmerga reaped an innumerable number of victims on the battlefield. Following the end of the Gate Rune War, Pesmerga left the country, in pursuit of his prey.

Pesmerga would continue to pursue Yuber, following his trail to the City-State of Jowston. Three years later, during the Dunan Unification War, Pesmerga would be encountered in the Cave of the Wind. Still searching, he agreed to join the New State Army and fought against the Highland Army of which Yuber was a part.

He remained a mystery, even to Richmond who could not find out any valuable information on him. Some rumored that he was a shadow of another existence, and he has never been seen eating or sleeping. During the war, Pesmerga implied that he and Yuber's fate were tied together in some manner.

After the fall of the Highland Kingdom, Pesmerga disappeared, pursuing Yuber, who had abandoned the Highland Army during the final battle. Pesmerga hasn't been seen since his involvement in the New State Army, not even fifteen years later when Yuber joined the Destroyers during the War of the Champions.

Pesmerga's name is of Kurdish origin, Peshmerga (Kurdish پێشمەرگە) literally meaning "one who confronts death". It is also the name of the military forces of Kurdistan.

In battle, he wields a two-handed sword. It upgrades as Crimson (クリムゾン, Kurimuzon ), Death Crimson (デスクリムゾン, Desu Kurimuzon) and King Crimson (キングクリムゾン, Kingu Kurimuzon) in both Suikoden and Suikoden II. The last weapon name is most likely a reference to British Progressive Rock band King Crimson.

Interestingly, Yuber's weapon upgrades in the same way in Suikoden III, but instead of a two-handed sword, he's using two single blades in combat.