Lino En Kuldes (リノ・エン・クルデス, Rino En Kurudesu) is a major character in Suikoden IV who also appears in Suikoden Tactics. Lino is the rough but open minded ruler of the Kingdom of Obel.

A father who lost much of his family to the sea, Lino has spent years preparing his small island kingdom for a future conflict with the Kooluk Empire that he views as inevitable.

Lino En Kuldes was the King of the Kingdom of Obel. Years before the Island Liberation War, he had lost his son and wife to a pirate attack. Since then he had diligently prepared Obel to defend against the Kooluk Empire, having noticed their increasing interest in the lands of the Island Nations.

As a king, he was known to be unfazed by almost anything and was respected as a fierce warrior, wielding his spear masterfully on the battlefield with courage and conviction. He was also known as a great king who cherished his people who, in return, cherished him back and gave him their trust and devotion. In spite of his appearance, he was also a skilled politician and would be one of the driving forces behind the creation of the Island Nations Federation following the war. 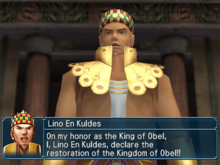 Lino restored Obel and showed off this outfit in the same party. Efficient.

When the hero was brought to Obel, Lino saw the potential for greatness and had him begin the task of rounding up recruits for what would become the Headquarters Ship. Once the Kooluk Empire began their invasion of Obel, Lino would join the crew of the ship and leave the island, swearing to return to liberate its citizens. Following the evacuation from Obel, he would take Elenor Silverberg's advice and duel the hero for leadership of the vessel, in order to ensure a strict hierarchy. After losing the duel, he would gift the hero with the Golden Seal, the symbol of his position as King of Obel.

Once the Headquarters Ship had gathered enough allies, Obel would be liberated and the people freed from their occupation. Lino would continue to fight for the remainder of the war, wielding his spear without fear all the way up to the final battle at El-Eal Fortress. Following the end of the war, he would become the first Chairman of the new Island Nations Federation, vowing to restore peace to the islands. 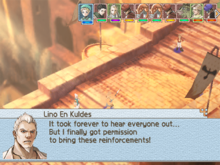 Lino supported Kyril's travels, first as a ruler, then as a warrior.

As Chairman, he usually presented himself with the dignity of a royal but was still as warm-hearted as before, especially with friends and his daughter.

After Kika introduced Kyril to him, he supported his journey from behind the scenes, sending trusted officers of his to accompany him. Although both Chairman of the Island Nations and King of Obel, his authority to direct military had to be approved by the council. By the time he realised how dire the situation in Kooluk was becoming, Lino would gain that permission and travel to Kooluk to join Kyril's group personally, shortly after Iskas' attempt to usurp the throne.

He would return to Obel with Flare and his officers following the collapse of the nation. The events in Kooluk convinced him that regardless of whether Rune Cannons had been eliminated from the world or not, they were too dangerous to be used any further.