Yam Koo is a fisherman residing around the shores of Lake Toran and the sworn brother of Tai Ho. He often gets dragged along by his sworn brother's whims.

Yam Koo's face was obscured by his messy blond hair but he was at least attractive to Kimberly, who held a torch for him, despite her marriage to his sworn brother, Tai Ho. His eyes are not visible in any of his artwork, but his Suikoden unique sprites indicate that they are possible grey.

He wore a loose-fitting blue kimono, tied with a dark blue obi. In Suikoden, he wore black boots but by Suikoden II was wearing simple, straw sandals. He also wore a green headband, mostly obscured by his hair. He also wore a necklace.

Yam Koo's weapon is a trident, a type of three-pronged spear. His trident is very similar to that of Tai Ho's with only the hilt being a different color.

Unlike Tai Ho, Yam Koo tended to be more logical and didn't wish to live his life purely by chance, calling Tai Ho's whims his "Big Brother's madness". Despite this, he would often smile and go along with Tai Ho's whims, despite his complaints.

During the Dunan Unification War, he became immersed in his fishing, spending much of his time at the docks of the New State Army Headquarters fishing.

Yam Koo was a fisherman from Seika and the sworn brother of Tai Ho. The two met during a gambling brawl and have been friends ever since. Yam Koo was a boat pilot operating out of Kaku at the time of the Gate Rune War. 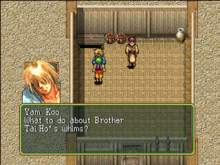 Should probably find him a wife

Yam Koo was swept away in one of Tai Ho's whims when Tai Ho agreed to have he and Yam Koo escort McDohl to Toran Castle after losing a game of Chinchirorin. When Tai Ho joined the Toran Liberation Army, Yam Koo joined along with him, despite his grumblings.

During the war, Tai Ho met Kimberly. Yam Koo, knowing Tai Ho's weakness for women, tried to protect Tai Ho from Kimberly. Following the end of the Gate Rune War, Yam Koo lived near the shores of Lake Toran, where he continued to live a carefree life and enjoyed fishing, oblivious to the fact that Kimberly had her sights set on him, not Tai Ho. 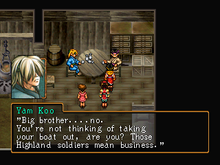 He decided not to join Tai Ho in battle during the Dunan Unification War, reasoning that his presence might drive his sworn brother to act more carelessly. His passion for fishing may also have discouraged him from leaving the docks.

Following the war, Yam Koo returned to the Toran Republic, where he enjoyed a life of fishing on Lake Toran.