Tuta (トウタ, Touta) is a character in Suikoden II and Suikoden III. Tuta is a doctor trained by Doctor Huan.

Tuta is a young medic trained by Doctor Huan. He is the son of one of Doctor Huan's friends and did chores for Huan, making deliveries as far as Viktor's Mercenary Fortress. Tuta first developed his interest in medicine when Huan cured his mother of an illness.

Doctor Huan foresaw the development of the Dunan Unification War and asked Tuta to serve as a medic with Viktor's forces. Although he could not perform any full-fledged procedures, Tuta helped as best he could and eventually became part of the New State Army. When Huan later join the army, Tuta continued to assist him.

Following the war, Tuta continued his advanced training under Doctor Huan, working harder than ever. 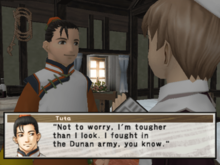 He has a medal of honor in skimming stones.

Tuta continued to study medicine under Doctor Huan and would grow to become a skilled doctor. After becoming a full-fledged doctor, he started journeying to villages lacking proper medical care.

He later served as a medical officer during the Higheast Rebellion which is where he first met Mio, who would later become his nurse.

He and Mio would continue to help smaller villages, eventually ending up in Iksay Village during the War of the Champions. There, he would join the Fire Bringer, serving as a doctor.

Following the war, he journeyed with Hallec to help his village, saving a lot of lives in the process.