Mitsuba (ミツバ, Mitsuba) is a supporting character in Suikoden IV and Suikoden Tactics. Mitsuba is a duelist who uses Reinhold to set up duels for potch wagers under fraudulent circumstances. 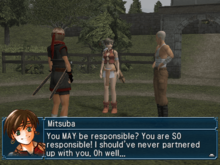 Even the scammer passenger gets in trouble.

Mitsuba was a cheerful young woman with a sunny disposition who earned a living by engaging in pseudo-fraudulent duels. These would be set by her accomplice, Reinhold, enticing passers-by to avenge some fabricated beating on him by challenging Mitsuba to a duel. She would then accept the duel as a high potch wager and would, normally, win handily, being a strong and talented swordswoman.

Reinhold participated under the false assumption that Mitsuba had uncovered some secret of his to blackmail him with. Mitsuba just happened to pass him by as he was reading a letter and Reinhold erroneously thought she had seen the sensitive information in the letter, forcing him into a life of servitude.

Jeremy was one of her past victims and he harbored a grudge against her because of this. She, on the other hand, just dismissed him as a weakling. Axel had also been a victim in the past, further proving both her skill and unscrupulous ways.

During the Island Liberation War, Mitsuba set up her operation on Na-Nal Island only to be unexpectedly defeated by the leader of the Headquarters Ship. She agreed to join the crew after her defeat, frustrated with Reinhold for sending such powerful marks against her.

She suspended her operation for the remainder of the war, but once it had finished, she continued to make a living using Reinhold to set up her duels.

Eventually the two would make their way to the Kooluk Empire where Reinhold would send Kyril to duel Mitsuba on the Terana Plains. She lost to Kyril but readily agreed to join his group, thinking that the journey could be profitable for her.

Mitsuba's main theme is the song "Magnificent Broadswordsmanship". It plays during the player's duel with Mitsuba on Na-Nal Island in Suikoden IV. It is song 9 on disc 2 of the Genso Suikoden IV Original Soundtrack.

The song returns in Suikoden Tactics when dueling Mitsuba on the Terana Plains. As the song is the same version as played in Suikoden IV, it is not included on the Rhapsodia Original Soundtrack.