Lucia (ルシア, Rushia) is a character who appears in Suikoden II and Suikoden III. She is the leader of the Karaya Clan. 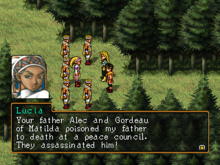 Yeah, but do you have to be so upset about it?

Lucia is the chieftain of the Karaya Clan who dwell in the Grassland. Her father, Kianu, was poisoned in a plot by Alec Wisemail, mayor of Greenhill, some years before. In order to fulfil her revenge, she and her elite soldiers fought with the Highland Army during the Dunan Unification War.

Fighting alongside Highland, Lucia would confront the New State Army several times. Eventually, she would be defeated by the New State Army in a battle at L'Renouille Palace and would finally give way when Teresa Wisemail's sincerity convinced her that the wrongs committed against her clan could be righted.

Although she had hated Teresa due to her father's doings and had tried to assassinate the leader of the New State Army, Lucia was open to explanation and fair dealings. Once Teresa became mayor of Greenhill, the Karaya Clan quickly received an offer of reconciliation.

Following the Dunan Unification War, Lucia continued to lead the Karaya, becoming a strong leader for the clan itself and also within the Six Clans. She would battle against the Zexen Federation many times over the years. Shortly after the war, she would give birth to her son, Hugo, whose father's name would go unrevealed. Lucia would raise him with pride, becoming as fierce as a mother as she was as a warrior. She would also become known for her diplomatic prowess as well as her martial talents.

When the War of the Champions broke out between the Six Clans and Zexen, the Karaya Village was razed by the Zexen Knights as part of their ploy to escape an ambush. Following this loss, the Karaya survivors would regroup under Lucia at the Great Hollow where she clashed with the Silver Maiden Chris Lightfellow. From there, she would strike with the Lizard Clan at the Zexen village of Iksay for a Grassland victory before forming part of the Grassland's attempted defense of the Chisha Village once the Holy Kingdom of Harmonia began their invasion of the region. This battle would also patch her adversarial relationship with Chris, who also fought for Grassland at this time.

Lucia would go on to align herself with the Fire Bringer, playing an active role in advising strategy and administration. Following the war, she would yield the position of Karaya Chief to Hugo, moving to the Dunan Republic in order to explore new directions for the clan's future.

Lucia is fought as a boss enemy in Suikoden II. She is fought three times and mixes strong physical attacks with powerful fire magic.