Kasumi (カスミ, Kasumi) is a supporting character in Suikoden and Suikoden II. Kasumi is a ninja from Rokkaku who rose to the position of Vice-Chancellor of Rokkaku. 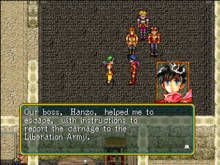 What, were we not good enough to send Mondo?

Kasumi was a ninja from Rokkaku who was forced to flee her home when Teo McDohl's Armored Cavalry attacked Rokkaku.

Following the Toran Liberation Army's victory in the Second Battle at Scarleticia Castle, Kasumi successfully reached Toran Castle and warned the Liberation Army of Teo's advance, fighting with the group for the remainder of the war.

Her talents at espionage were utilized several times through the war, including in the infiltration of Moravia. Kasumi's talents usually meant that enemy movements were laid out for all to see. In battle, her long reach and ninjitsu abilities made her well able to defeat her opponents. She holds the rare Shrike Rune, giving her even more abilities as a ninja. 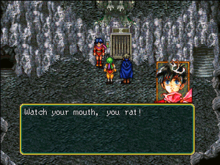 After the last battle, Kasumi discovered that a number of ninja, including Hanzo, survived Teo McDohl's attack on Rokkaku. She had fallen in love with the leader of the Liberation Army during the war but was unable to confess her feelings.

Her feelings were not always as hidden as she would have liked. Krin, in particular, mocked her for her crush and change in demeanor whenever the hero was in her vicinity. She decided to follow her duty, rather than her heart, and following the end of the war, Kasumi returned to Rokkaku.

Three years later, during the Dunan Unification War, Kasumi had become Vice-Chancellor of Rokkaku. She also worked closely as a liaison between Rokkaku and the President of the Toran Republic, Lepant, due to her serving in the Gate Rune War.

Although she was still young, her abilities and competency were never in doubt and when Lepant agreed to aid the New State Army, she would be one of two officers recommended by Lepant to join the army. During the war, Kasumi was reunited with McDohl at Banner Village. Once again, however, she was unable to articulate her feelings for him.

Following the end of the Dunan Unification War, Kasumi returned to Rokkaku while continuing to occasionally meet with McDohl. Still hesitant to express her feelings, it seems her painful love is likely to continue.