Grady (グレィディ, Gureidei) is a minor antagonist in Suikoden. The military commander of Rockland, Grady steals the money collected from Rockland's taxes and keeps it for himself. 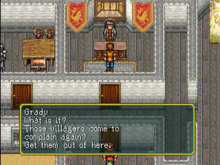 Man, why we do keep electing this guy? Oh right, autocracy.

The corrupt military commander of Rockland, Grady took Rockland's taxes and kept them from himself. Eventually, Kraze Miles noticed that Rockland was not paying its taxes and sent the Imperial Guard in order to investigate the reason behind Rockland's tax woes. When a party of Imperial Guard members arrived, Grady placed the blame for the taxes on the Mt. Seifu bandits, claiming that bandit pillages had kept him from being able to collect taxes. In reality, Grady himself was stealing the tax money to line his own coffers.

Though it was not technically their mission to do so, the Imperial Guard members went to Mt. Seifu and brought back Varkas and Sydonia, the leaders of the Mt. Seifu Bandits. Upon hearing of this, Grady immediately imprisoned the two, despite Varkas' protest that they were innocent and that it was Grady himself who was the tax thief. Grady thanked the Imperial Guard for their service, and gave them a cash prize, claiming it to be a gift from the townspeople. Later, after the Imperial Guard left, Grady bound the men upon stakes outside his mansion, waiting for the two to starve to death.

Eventually, however, the hero and his party, some of the members of the Imperial Guard who had captured Varkas and Sydonia, learned how cruelly Grady was treating the two men and, feeling that they were responsible for this, the group vowed to help the Toran Liberation Army rescue them. Thanks to a fiery distraction from Viktor, the group was able to free the thieves who threatened Grady before escaping. Grady would flee his position toward the end of the war, much to the delight of his former subjects.