Zerase (ゼラセ, Zerase) is a major character in Suikoden V. Zerase is a supremely powerful magician and bearer of the unique Star Rune. She serves as something of a guardian for the three runes of Falena, possibly due to her connection to the Night Rune.

Mysterious and sharp-tongued, she spends the game trying to ensure the safety of the Dawn Rune and Twilight Rune, hoping to preserve its role to keep the Sun Rune in balance, causing her much anguish at the actions of their bearers.

Zerase is a pale, slender woman clad exclusively in black with gold trim. According to designer concept art, Zerase's long black hair reaches to the small of her back where it is tied together in a low, loose ponytail. She has cool blue eyes, emphasised with purple eye shadow. Under her flowing, dark robes, she wears a sheer dress, held in place by her choker. On each wrist she wears five dark bangles.

Zerase also carries a muff hand-warmer, dangling from her neck by a chain, which she normally keeps her hands in unless she is attacking or using a rune. Her feet are never seen.

In battle, Zerase wields a long, pointed needle which she throws at her enemies with her right hand. She apparently summons these needles with a flick of her wrist. The Star Rune is attached to her forehead according to game mechanics but she has no marking to indicate this, although they may be covered by her fringe. 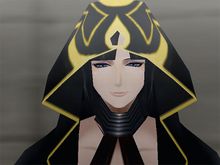 Zerase reveals a rare smile as the runes are returned.

Zerase is secretive and holds a sharp tongue, being quick to ready a barb or admonishment towards friend or foe for their shortcomings. She has a strong sense of duty regarding the safeguarding of the three runes of Falena, especially the Sun Rune itself. It is this that leads her to be quick to insult the royal family for what she sees as their lapse in their duties. It was this that led her to state that she would not hesitate to kill the Prince of Falena if he proved to be unworthy of the Dawn Rune and to attempt to remove the Twilight Rune from Alenia and then Sialeeds.

Keeping her knowledge close to her chest, Zerase rarely provided answers unless she felt it directly important to her goals. That said, she is never actively dishonest, preferring to bluntly admit that she will not answer questions rather than obscuring the truth with lies. Her curtness comes off as rude; when Lyon was vitally wounded in the New Queen's Campaign, Zerase refused to help, stating that the Dawn Rune simply wasn't powerful enough in its current state to heal her. Although dismissive, this turned out to be exactly the case, allowing the Prince to eventually increase the ability of the rune and heal Lyon.

As Zerase's greatest concern is that of the three runes of Falena, her greatest emotional outbursts come when those runes are misused. Although she was dismissive of Alenia for being "unworthy" of the Twilight Rune, she was also upset at its misuse. This only intensified when the rune chose Sialeeds as its bearer and was able to wield much more of the rune's powers. Her attitude towards the Prince would soften slightly as she came to believe he was a worthy host for the Dawn Rune, further empathizing how her attitude centered around the three runes. When the three runes were restored to their proper place following the final defeat of Marscal Godwin, Zerase seemed much more at peace, even smiling before vanishing.

Leknaat regarded her as a "traveler of the night and bearer of stars" and as someone who could see "the stars that guide people's destinies". The two apparently know each other, with Leknaat exercising a sense of authority over the magician. 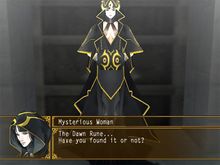 Zerase demands to know the location of the Dawn Rune.

Zerase first appeared to the Prince, Sialeeds and Lymsleia at the East Palace, where the Dawn Rune had been housed prior to the Lordlake Uprising. Demanding to know if the rune had been found, Zerase chided the Falenan royal family for its incompetence, much to Lymsleia's anger, before disappearing without a trace.

She would not be seen again until the Prince and his party had fled to Rainwall, following the Queen's Assassination. She was seen in the town, apparently attempting to concentrate on the Dawn Rune's location and later, when the Prince uncovered the Dawn Rune in the Barows' mansion, Zerase appeared once more, remarking that the Prince had better live up to the expectations of the rune, or she would kill him before vanishing once again.

The Twilight Rune and Alenia

As the Sun Rune War began, the Sindar ruins at Ceras Lake had been uncovered and chosen as the headquarters of the Imperial City Recapture Army, Zerase appeared following the vision shown in the sealed room at the top of the ruins. She would reluctantly accept that the Prince's bearing of the Dawn Rune was no small twist of fate. Stating that she would answer no questions beyond her own name, especially not about the Sindar or the vision that was just viewed (a statement which irked Lorelai and Zweig to great length), she did agree to oversee the Prince's handling of the rune, thus joining the Recapture Army as a powerful magician. 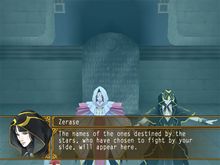 Zerase summons the Stone Tablet of Promise, inscribed with those chosen by the stars to fight alongside the Prince.

During the siege of Doraat, when it was revealed that Alenia had become the bearer of the Twilight Rune, Zerase angrily accompanied the Prince in order to force its removal from its bearer, whom she considered unworthy. She would caustically lambaste Alenia verbally for her presumption in bearing the Twilight Rune through some "trick", rather than being chosen by the rune itself. After defeating Alenia in battle, she tried to remove the Twilight Rune, which Alenia was rapidly losing control of, after countering its power but failed when Dolph interceded, escaping with Alenia before Zerase could extract the rune. Following the siege, she also had a short conversation with Jeane, whom she seemed to be familiar with. During their brief encounter, Zerase seemed to resign herself to Jeane's part in giving Alenia the Twilight Rune.

Following the siege, Zerase returned to the sealed room atop the Ceras Lake headquarters where, worried by the use of the Twilight Rune, seemed willing to impart some information on the matter before Leknaat appeared. The two seemed to be highly familiar with each other, Zerase sardonically noting that Leknaat was telling her to continue to aid the Prince in her own mysterious way. Leknaat referred to Zerase as a "traveler of the night and bearer of stars", a title she would later reject as being too lofty for someone as lowly as herself. Zerase would summon the Stone Tablet of Promise and, once Leknaat disappeared, returned to her usual reticent silence.

She would assist the Prince during the New Queen's Campaign, fighting alongside Roy with the aim of recovering the Twilight Rune and protecting what she saw as a foolish child from the power of the rune. Although Alenia was once again defeated, Zerase did not get a chance to reclaim the Twilight Rune as the rune had already been removed following the events at Doraat. Following Lyon's fatal injuries, she offered little help, glibly noting that the Prince's Dawn Rune simply wasn't capable of being fully harnessed by the Prince to heal her at that point. 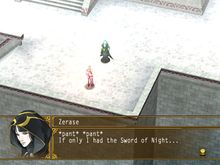 Zerase laments being unable to overcome the Twilight Rune.

In the latter stages of the war, hearing of the decimation of Recapture Army scouts attempting to infiltrate Stormfist, Zerase realized that someone else must have equipped the Twilight Rune, someone actually chosen by the rune. This was confirmed when she witnessed the difference in power between its use in Doraat and its use in Stormfist. She accompanied the Prince and his companions in their infiltration of the city. She helped fight against Sialeeds, the new bearer of the rune, but was unable to persuade her to remove it before she escaped.

She later got her one-on-one confrontation with Sialeeds at the Sol-Falena Dam, her Star Rune clashing with Sialeeds' Twilight Rune, in order to stop her from destroying the dam. However, her rune was not powerful enough to overcome the mastered Twilight Rune. Exhausted, Zerase remarked that she needed the "Sword of Night" in order to overcome the rune's power. However, Sialeeds was soon defeated by the Prince and his companions and it was Zerase's knowledge of the Dawn and Twilight Runes that allowed the Prince and Sialeeds to cancel out the effects of the Sun Rune, used by the Godwins in a final attempt to destroy the rebel forces.

Zerase can also be localized as Dzerassæ. Dzerassæ was a figure in Ossetian mythology, the daughter of the sea god Donbettyr. Donbettyr's many daughters were said to be incredibly beautiful in a similar vein to the Nereids of Greek mythology.

Her weapon is a throwing needle named "Shooting Star", which upgrades to "Brilliant Star" and, finally, "Blinding Star". This reflects her nature as both the bearer of the Star Rune as well as the title Leknaat referred to her as: the traveler of the night and bearer of stars.

Zerase's theme is the song "A Beauty in Black" which first plays during her appearance at the East Palace. It is song 37 on disc 1 of the official Suikoden V Original Soundtrack.