Gremio (グレミオ, Guremio) is a supporting character in Suikoden who makes a cameo in Suikoden II. Gremio is a slight man with long, blond hair and green eyes. His hair is tied into a ponytail at the back. Despite his small stature, Gremio is quite strong, able to wield his battle axe deftly. He has two scars on his face, meeting in a cross on his left cheek, from when he was captured by thugs who had captured the young McDohl.

He wore a large, stylish, green cloak, matching the color of his eyes, over a simple blue outfit. His axe has a long shaft, gifting Gremio a variety of ways to attack, such as cutting, poking, hooking and striking. Given Gremio's reluctance to fight, it's possible that the size of the axe head is for intimidation purposes.

Gremio was entirely loyal and dutiful towards the hero, whom he always called Young Master. He saw something of himself in his charge, as both had lost their mothers at early ages. At first, Gremio looked after McDohl as part of his gratitude to Teo but came to develop his own familial love for the hero. 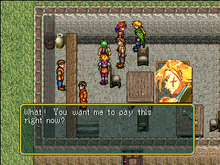 When you're rich, no one wants you to pay. When you're poor, everyone calls in their debts. Go figure

Due to the incident involving McDohl's kidnapping as a child, Gremio was highly protective of him, willing to throw his body in the way to shield him if necessary. As the hero grew older, Gremio realized that he was not needed as much in that regard, but still wished to be near him. In truth, he himself was uncomfortable if not near the Young Master.

Gremio was an excellent cook, whose stew recipes came from his mother, though his own special stew was an original creation. Although a capable fighter, he was never happier than when working in the kitchen, preparing good food for the household. Other duties in the household included taking care of the finances, something that would lead him into hot water with the debt-collector Camille.

Steward of a Scion 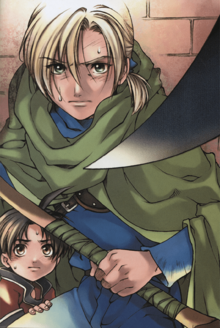 Ah, so fresh faced and unscarred. Physically and emotionally

Gremio originally lived with his parents near the Scarlet Moon border with the City-State of Jowston. In SY 439, when he was nine, his parents were killed during a border dispute. His mother protected him from the Jowston soldiers' blades, dying as a result. Alone, Gremio spent the next seven years of his life wandering. Teo McDohl found him lost in the Karakas Desert and, seeing Gremio's good character, brought him to Gregminster.

There, he would work as a servant as well as helping to raise Teo's son. Initially, he worked merely to repay his debt to Teo but quickly came to truly care for his young charge. The axe Gremio wielded was originally his father's, who had used it in battle himself.

The large gash on his cheek came from an incident three months into Gremio's tenure, during the War of Succession. Teo's son was kidnapped by Imperial Army soldiers under the employ of Geil Rugner in order to prevent Teo McDohl from attacking. Gremio attempted to prevent the abduction but was easily felled and tied up by Assam's men.

Gremio was kept alive to deliver Assam's ultimatum. Either Teo's famed Armored Cavalry would meet Geil's force in a decisive battle at the Fortress of Kwaba without their famed armor, or the young McDohl would be killed. His face was scarred as a mark of this ultimatum.

After being brought to Teo and relaying the ultimatum, Gremio would sneak back to Gregminster in order to rescue his young charge. Caught, he would almost be killed only to be rescued by Eiji. Eiji would help Gremio escape to Sarady, where the two would uncover McDohl's whereabouts. Gremio rescued the young child from the Sarady inn, slaying the bandit kidnappers with the help of Eiji and Ronettes, receiving his second facial scar in the fight. 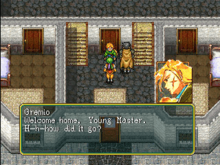 Look, I just wanna go to my room and play Xbox

After the rescue, Gremio engraved the words "I will always protect young master" onto his axe, giving it the name "Axe of the Oath." After this, Gremio began to train as a soldier in order to keep to this oath, although it occasionally drove him to be overprotective.

Although willing to fight to protect the Young Master, at heart he was a familial person, much more comfortable cooking and taking care of the home than battling. Responsible for the food at the McDohl home, he held himself to a very high standard, especially as regards to his stews, which were said to be professional grade. These stews were originally the recipes of his mother.

As a war orphan, Gremio empathized with his young master having never seen the face of his mother. He resolutely swore to protect him and to stay by his side. Thus, after the young master was branded as a fugitive, Gremio left Gregminster along with Cleo as well. 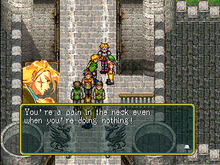 Personally, I think he meant every word

At the Fortress of Kwaba, Gremio forced himself to grab and lambaste his young charge as though he were a miscreant in order to throw off suspicion of him being Teo's son. Although the ploy worked and everyone involved understood, it still hurt Gremio to treat McDohl so harshly and he even offered to be punished for his actions. Even after his charge became leader of the Toran Liberation Army, Gremio upheld his duties, often accompanying him on vital missions.

During the middle of the Gate Rune War, he joined the reconnaissance of Kunan and the attempt to free Liukan from Soniere Prison despite Viktor's warnings. In Rikon, he would realize that McDohl no longer truly needed him but wished to continue to protect him as someone akin to a family member. 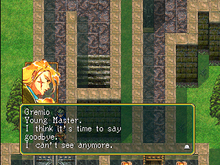 You're being fairly blasé about this whole thing, Gremio

Spotted while infiltrating Soniere Prison, Milich Oppenheimer smashed a vial of the man-eating Spores of Agony in order to stop them from escaping with Liukan. Gremio quickly pushed the other Toran Liberation Army members out of the room and shut himself in the room, sacrificing his life. In his last words, Gremio told Teo's son how proud he was of him for growing into such a responsible, mature young leader.

Prior to the end of the Gate Rune War, Gremio was miraculously restored to life by Leknaat using the power of the 108 Stars and the back half of the Gate Rune, bolstering the morale of the entire Liberation Army. Following the fall of the Scarlet Moon Empire and the end of the Toran Liberation War, Gremio, ever loyal, continued to follow Teo's son after he left the Scarlet Moon Empire. 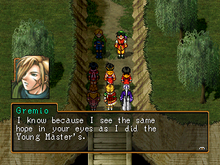 May it be quenched as surely as his was

Gremio continued to accompany his master on his journey following the Gate Rune War. When they stopped for a time at Banner Village, Gremio helped to keep people away for his master's piece of mind. Although he understood McDohl's plight, he did encourage him to help Ko when the boy was kidnapped.

He would return to Gregminster with McDohl for a time during the Dunan Unification War. He would also gift one of his recipes for use by the New State Army chef, Hai Yo.

In the very early stages of development, the hero was envisioned as the son of a bandit and so Gremio too was envisioned as a bandit, entrusted with the care of the hero. At an early point, when the combat system had not been fully finalized, Gremio was intended to wield both his battle axe and throwing knifes in battle. Eventually the throwing knives were dropped, but artwork exists of him wielding them.

There were originally no plans for Gremio to be returned to life after his death at Soniere Prison. However, when a staff member remarked that there was nothing special for recruiting all 108 Stars, the idea of bringing Gremio back as a 'reward' quickly took hold.