He is a general of the Highland Army who shifted his loyalties from Luca Blight to Jowy Atreides during the Dunan Unification War.

Befitting his fiery personality, Seed had medium-length red hair and amber, almost red, eyes. He wore a long white long coat, the color of Highland, with red piping throughout over white armor, including gauntlets and greaves, and black pants. He also wielded a sword in his right hand. 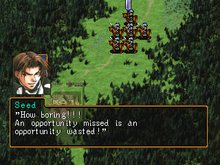 Yeah, an opportunity to murder though, Seed?

Seed was an impulsive officer of the Highland Army. He had a strong preference for action over strategizing which occasionally lent him to make hasty decisions. He always fought with his sword at the forefront of battle, befitting his personality. He held great confidence in his own abilities.

Although his hot-headed nature contrasted strongly with that of Culgan, they nonetheless had a strong bond, brought about by their patriotism for the Highland Kingdom. Although he had a passion for battle, he lacked Luca Blight's ruthless love for slaughter. 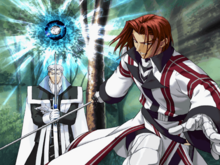 Let's give 'em the ol' razzle-dazzle!

Seed was a Highland general, often paired alongside Culgan, his contrasting comrade-in-arms. He had advanced in the Highland Army, despite his relatively young age, due to the extreme meritocracy implemented by Luca Blight.

During the Dunan Unification War, he formed part of the Highland Army offensive, serving under Solon Jhee. Aggressive, he always advocated attack over caution during the early stages of the war.

During the war, Zaj Quiroz on behalf of the Holy Kingdom of Harmonia, requested Seed and Culgan track down Nash Latkje in Greenhill Forest. Together with Culgan, Seed was able to bring Nash down with their combination attacks but because he had been poisoned during the fight by Nash's Twin Snake Sword Großer Fluss, Culgan agreed to let Nash go in exchange for the antidote. 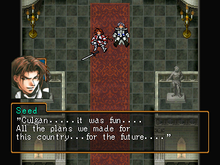 I guess the ol' razzle-dazzle fizzle-fazzle'd...

As the war continued, Seed and Culgan came to feel that Luca Blight's continued presence would bring catastrophe to the Highland. Thus, in Greenhill City, just after they had warned Rowd off of seeking revenge against his former subordinate, Seed pledged his sword to Jowy Atreides in order to protect Highland.

However, although Jowy would overthrow Luca and Seed would continue to serve to the best of his abilities under King Jowy's rule as commander of the 4th Highland Army, in the end Highland would fall and Seed perished alongside Culgan in L'Renouille Palace attempting to fight off the New State Army. As he died, he held onto his joy in serving his country, having lived his life with no regrets.