Ain Gide (アイン・ジード, Ain Jīdo) is a character in Suikoden. A general of the Scarlet Moon Empire, Ain Gide stayed true to Barbarosa Rugner throughout the Gate Rune War. 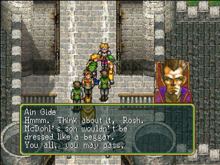 Wait... these are my regular clothes, jerk!!

Ain Gide was a loyal subordinate of the Scarlet Moon Empire. Originally entering the military as a low-ranking soldier, he was assigned to Teo McDohl's unit. There, he was noticed by Teo and promoted. During the War of Succession, Ain Gide fought alongside his good friend Teo during the decisive battle at the Fortress of Kwaba, doing what he could to support his comrade during a particularly stressful situation.

During the Gate Rune War, he had jurisdiction over the Fortress of Kwaba, as an Imperial security commander. Although highly regarded, he was not a showy or flashy officer and eschewed titles and nicknames. Due to his friendship with Teo, when Teo's son came to the fortress while on the run for treason, Ain deliberately overlooked him despite knowing his identity, placing his friendship above his duties.

Despite this he was still a true warrior and loyal to the Empire. As the Gate Rune War neared its conclusion, Ain's forces were withdrawn from Kwaba and reorganized into the final defense at Gregminster. Following the final battle, and knowing the war was over, Ain gave the order to his men to surrender.

Rebuffing the offer of help from his men, it was Ain alone who stood in the way of the Toran Liberation Army at the last bastion of the Empire, Gregminster Palace. Although encouraged to stand down, and knowing that the Empire was defeated, Ain refused to move.

Instead, he battled the forces of the Liberation Army until fell. By staying true to both his friendship with Teo and his loyalty to Emperor Barbarosa, Ain Gide showed that the most important thing a warrior has is one's own actions.

Ain Gide is fought as a boss enemy in Suikoden. He is encountered in Gregminster at the end of the game. Guarding the entrance to Gregminster Palace, he is the game's penultimate boss. He is a magic-focused opponent and can decimate physical-focused fighters with relative ease.