Milia (ミリア, Miria) is a supporting character in Suikoden. Milia is the partner of Thrash and the Captain of the Knights of the Dragon's Den. 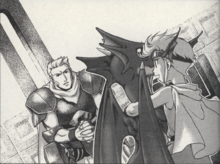 Let me take notes, I have a feeling I'll be looking after a kid like you some day

Milia served as the Vice-Commander of the Dragon Knights under Joshua Levenheit before and during the Gate Rune War. Her ability to never lose her cool, no matter how difficult the mission, made her very well trusted by Joshua. She has bonded with her red dragon, Thrash, as a child and she rode him into battle. Her valiant and majestic bearing made her a much-feared opponent on any battlefield.

During the Gate Rune War, Milia accompanied the Toran Liberation Army to Seek Valley in order to find the Moonlight weed needed to cure the sleeping disease that had affected the order's dragons. 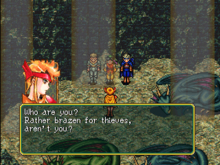 Immediately after Ted died following his unexpected confrontation and reunion with McDohl, Milia stepped forward to take the Moonlight weed, demonstrating her collected nature that served her well.

Once the dragons had been cured, Milia joined the Toran Liberation Army. The freezing breath of her dragon, Thrash, would be used prior to the Battle at Floating Fortress Shasarazade to create a fleet of ice ships for the attack. 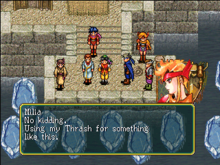 Hey, do you want us to use him for parts like Black?

Combined with Joshua and Futch, their Dragon Knight regiment reigned down destruction on Imperial forces. Following the Gate Rune War, she would return to the Dragon's Den, continuing her duties.

Around the time of the Dunan Unification War, Milia would have a daughter, Sharon. At some point before the War of the Champions, she would also ascend to the position of Commander of the order sometime after the Gate Rune War, succeeding Joshua and becoming the bearer of the Dragon Rune, one of the 27 True Runes.