Kwanda Rosman (クワンダ・ロスマン, Kuwanda Rosuman) is a supporting character in Suikoden. One of the Five Great Generals of the Scarlet Moon Empire, Kwanda Rosman loyally served Barbarosa for 10 years.

Kwanda Rosman was a large, powerful man. He had blue eyes. He is never shown without his helmet and full body armor, so his hair color is unknown. His silver armor consists of large pauldrons, a breast plate, graves, and gauntlets. His chest plate alone weighs over 30kg (66 lbs.). Underneath he wears navy blue clothing as well as a red tabard.

Some assume that Kwanda's strength lies in his armor, but they would be mistaken. He is able to fight for long periods of time without any loss of stamina due to his armor. He also has the mental strength to continue defending himself against any attack without moving at all, and to aim for an opening in the enemy. He has inexhaustible stamina and unbreakable mental strength.

It is said that if he were not under the corrupting influence of Windy's Conqueror Rune he would have been even more difficult for the hero to overcome in battle. 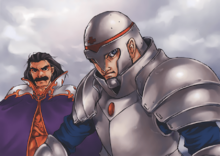 What if you both wore armor though?

Kwanda Rosman is a powerful soldier and Great General who favors the use of the halberd in battle. Kwanda was born into a military family and his impressive armor had been handed down through his family for generations.

When the War of Succession broke out, Kwanda was an officer stationed at Pannu Yakuta Castle. He would become part of Barbarosa's forces when Barbarosa began to reorganize his forces from the region. Kwanda's force, which protected Barbarosa, became known as the Guard. Following the war, they would be reorganized into the Imperial Guard.

During the War of Succession, he once used his own body as a shield when Barbarossa was taken by surprise by a volley of archers. He wore his armor ever since. He became known as "Iron Wall Rosman" and "Kwanda the Insurmountable" for his invulnerable defense, heavy armor and dedication towards protecting Barbarosa's life during the war. 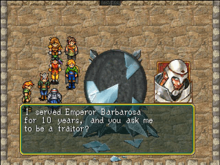 Freed from the effects of the Black Rune and realizing that the Empire was quickly becoming corrupt beyond repair, Kwanda initially requested to be executed as befitting a warrior. However, the hero would convince him to join the Liberation Army as his work was not finished. He wished to remonstrate with the emperor and be the wall that shielded him from the corrupt influences destroying the Empire.

Following the fall of the Scarlet Moon Empire, he became the Commander in Chief of the Republican Army showing that the new Toran Republic was also insurmountable.