Norden (ノルデン, Noruden) is a minor character in Suikoden V. Norden is a heavy drinker suffering from the trauma of his role in the decimation of Lordlake.

Norden was a middle-aged drunk wasting his days in the taverns in Rainwall. In the past, he had been the former Vice-Captain of the Rainwall garrison under Euram Barows. Although Euram was technically Norden's superior, it was Norden who was considered the real man in charge. However, when Euram would spout orders, Norden had no authority to go against them. In SY 447, when Lordlake townspeople marched to protest about the building of a dam which drastically reduced their water flow, Norden was ordered to engage the protesters; the resulting protest escalated into a full-scale riot. 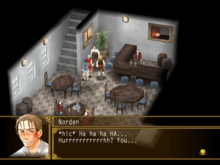 Cheers. I'll drink to that, bro.

Following the Lordlake riots, Norden resigned his commission and started drinking. He was married, but as his drinking continued to increase, his wife eventually left him; Norden never told her the reason for his drinking. One of the few people privy to events surrounding the incident, Norden was paid off and shadowed by agents of the Barows Faction who were eager to make sure the truth of the rebellion would not be revealed. In 449, Lucretia Merces had Oboro find Norden who, at first, refused to cooperate with the investigation into what had really happened two years prior. However, when brought to Lordlake and confronted with the result of the rebellion, Norden agreed to reveal what he knew.

Norden retold his story in a dramatic fashion and related the full story of Euram's incompetence. Additionally, he also verbally assaulted the Barows family for what they had done. This revelation proved vital in the split between the Prince and the Barows Faction. Wishing to repent for his mistakes, Norden would then join the Imperial City Recapture Army.

Galleon later noted that Norden's sense of duty was what led him to follow orders which led to disaster, much as the Queen's Knight had done. Upon hearing that Bastan had cause for complaint with the Barows family, Norden remarked that he would like to buy him a drink sometime. Norden continued to drink quite frequently during the war and was often seen in the castle's bar. However, as the war drew to a close, Norden began to drink less and instead savored the flavor of his liquor more than its effects.

Following the Sun Rune War, he moved to Lordlake to aid in its reconstruction. Earlier during the war, Oboro had taken it upon himself to inform Norden's wife of the reason for his troubles and so, Norden was brought to joyful tears upon the return of his wife, whom he happily remarried.