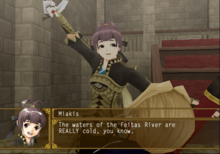 Miakis is a Queen's Knight and the youngest of those appointed in the wake of the Armes Invasion. She has a bright, upbeat personality, as well as a sarcastic sense of humor. She could apparently get along with just about anyone, though Alenia didn't like her. Miakis' father was a member of the Dragon Cavalry, and is best friends with the organization's leader, Craig Laden, who Miakis claimed was like an uncle to her. After her acceptance into the Queen's Knights, her father retired from his position, and both her parents began a trip around the world. Miakis herself doesn't even know where they currently are. She was also friends with Rahal and Roog growing up in Sauronix.

Growing up in Sauronix, Miakis was something of a tomboy, and frequently sparred with the boys in town, displaying remarkable fighting ability. She wished to join the Feitas Dragon Cavalry but was denied entry due to the organization not allowing female members. Not wanting to see her potential go to waste, Craig Laden recommended her to Ferid.

After her acceptance into that organization, Miakis became the personal bodyguard of Lymsleia Falenas. In addition to being her bodyguard, she became extremely close with the young Princess, though she would often take pleasure in playing jokes on her. An example of this would be Lymsleia's Sacred Games, during which Miakis convinced the Princess that the opening fight her brother, the Prince, took part in was more than just a ceremonial match. This caused a great deal of worry for Lymsleia, who feared that she would have to marry her own brother if he won the tournament.

During the Godwin attack on the Sun Palace, Miakis attempted to escape with Lymsleia, though they were prevented from doing so by fellow Queen's Knights Zahhak and Alenia, both supporters of the Godwin family. For some time after the Godwins seized power, Miakis remained close with the Princess at the Sun Palace. However, after Gizel Godwin officially became the new Queen's Knights Commander, Miakis was devastated when he separated her from Lymsleia, claiming that protecting the new Queen was his duty now. After this, she was sent to Doraat along with Alenia in order to help defend the city from the Prince and his Imperial City Recapture Army. Being forced apart from her close friend, Miakis now believed she had nothing left in life except for her duty as a Queen's Knight and faced the Prince in a duel. Her defeat at the hands of the Prince helped her come to her senses, and after that she joined his forces, knowing that the best way to reunite with Lymsleia would be to end the war as quickly as possible.

Miakis witnessed the slaying of Queen Arshtat at the hands of Georg Prime during the Godwin's coup d'état, though for a while she didn't know the whole story behind this and viewed Georg as a traitor. She later suspected that the reason she was sent to Doraat is because Gizel knew she would join the Recapture Army, and that she would tell the Prince of Georg's involvement in Arshtat's death, causing some disruption within the Loyalist forces. After learning the truth about the incident from Galleon, however, Miakis no longer held contempt for Georg and was ashamed by her actions, claiming that she wouldn't have hesitated to kill Georg if given the chance.

After the end of the Sun Rune War, Miakis continued to serve Lymsleia as a guardian and confidant for life, and they remained as close as sisters.