Reinhold (ラインホルト, Rainhoruto) is a supporting character in Suikoden IV and Suikoden Tactics. Reinhold is a talented warrior and teacher who finds himself under the commander of the con-artist Mitsuba. 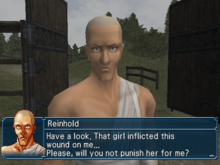 Wow, you bandaged it up really quickly, I must say.

Reinhold was a spear-wielder who helped Mitsuba in her dueling scams by playing a victim of hers who would beseech passers-by to extract revenge on his behalf. Contrary to his somewhat scary appearance, he held a dutiful, polite personality.

He was under the impression that Mitsuba had read a letter of his, exposing a secret and so was unable to go against her plans but, in actuality, Mitsuba did not have knowledge to blackmail Reinhold with, she just happened to pass by at the same time Reinhold was reading said letter.

During the Island Liberation War, the two operated on Na-Nal Island where Reinhold managed to send the hero to duel her, only for Mitsuba to lose. As a result, she joined the crew of the Headquarters Ship, bringing Reinhold along for the ride. There, he opened a training hall, drilling those who visited him throughout the war. In addition to aiding Mitsuba's cons, he was under her thumb in every way, even pinching various passengers on the ship under her orders.

Following the war, he continued participating in Mitsuba's scams, ever fearful of the secret he imagined she held over his head. He eventually ended up in Merseto, sending his latest victims to the Terana Plains to duel Mitsuba. This plan would backfire once again when Kyril managed to defeat Mitsuba and so Reinhold found himself dragged into travelling with Mitsuba as she became a colleague of Kyril.