Apple (アップル, Appuru) is a recurring character who appears in Suikoden, Suikoden II and Suikoden III as well as Genso Suikogaiden Vol.2 and Genso Suikoden Card Stories. Apple is a military strategist who studied under Mathiu Silverberg. 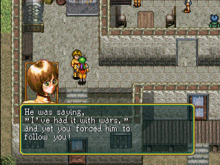 Apple was born in Seika but had lost her parents in the Scarlet Moon-Jowston War at a young age. As such, she believed all battles were tragedies, regardless of the results. She was one of the children adopted and taught in Mathiu Silverberg's classroom, becoming something of a foster child. From Mathiu, she learned his maxim of ending battles as quickly as possible, as opposed to seeking victories at all costs.

Boasting a clear mind, she was eventually able to study at Crystal Valley in the Holy Kingdom of Harmonia before returning home once she heard news of the Gate Rune War. When she heard that Mathiu had become the strategist of the Toran Liberation Army, she had doubts over his decision as it seemed so opposed to the non-violent and friendly teacher she knew and admired.

She would journey to Toran Castle and, once convinced that Mathiu was working "to end the war" and bring a peaceful future, joined the Liberation Army in order to support Mathiu. She would continue her studies under Mathiu there, in his spare time. Apple's esteem for her teacher would only grow as she would see his stratagems put into action during the war, but she continued to resent McDohl for supposedly dragging Mathiu back to the battlefield.

Apple would lose her mentor at the war's end as he passed away from the wounds he suffered at Shasarazade.

Having lost Mathiu to war, Apple endeavored to write the biography of her late master. In order to gather materials for this task, she tried to follow in the footsteps of his own journey. Along the way, she witnessed the slaughter of Toto Village by Luca Blight and decided to aid what would become the New State Army. As a war orphan herself, she was no stranger to seeing her loved ones lost to war. 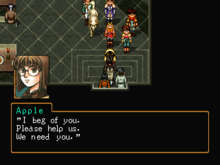 Please bring your fire-themed card deck, I beg you.

She served as a deputy strategist in the New State Army, saying her strategic and tactical skills were still developing. However, a senior pupil and friend, Shu, was an excellent strategist. Shu at first refused to join, rebuffing Apple continuously, until she prostrated herself before him. This loss of face angered Shu until Apple remarked that she was willing to throw away her foolish pride if needed. Shu would soon join and Apple's conviction and prostrations to recruiting the head strategist indirectly greatly contributed to the victory of the New State Army.

While serving the New State Army, Apple had to put up with the advances of Sheena, a difficult situation as Apple had little experience dealing in such matters. Neither did she have any feelings for Shu, the two being childhood friends.

Following the end of the Dunan Unification War, Apple resumed her work on the biography of Mathiu's travels. According to one traveler, someone with her appearance was seen in the Holy Kingdom of Harmonia. Perhaps she may have aims to study once more at Crystal Valley. 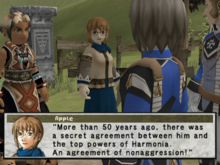 Sometime before the War of the Champions, Apple had gotten married but by the time of the war, she had long divorced her unfaithful (and unidentified) spouse. By this time, she had stepped back from being an active strategist, functioning more as an advisor and tutor.

During the events of the War of the Champions, Apple traveled with Caesar Silverberg while continuing her research into Mathiu's life. She would cooperate with the Fire Bringer along with Caesar after meeting Hugo.

Following the war, she finally completed her biography on Mathiu and returned to Seika, opening a school there.

At least you don't beg this time around.

Apple plays a slightly truncated role in Genso Suikoden Card Stories in comparison to Suikoden II. She does not appear in the game until the player arrives in South Window City, following the fall of Muse City. She accompanies the player to Radat Town and helps to recruit Shu and continues to play a supporting role in the story from there on.

After meeting Apple in chapter 4, Apple is an event encounter in every field area, save for the Path to Matilda. When talked to, she allows the player to edit their decks in the same manner as the game's inns. This can be useful for editing your deck for any event bosses you may have passed by, as leaving would reset the field.

Like other event encounters, Apple will leave once you have confirmed you have completed editing your deck.