The hero (主人公, Shujinkō), known by several different names, is the protagonist of Suikoden. As well as being the protagonist of the original game, he also appears as a secret recruit in Suikoden II and makes a cameo in Genso Suikogaiden Vol.2.

The hero is the son of Imperial General Teo McDohl, he was supposed to serve the emperor himself. However, his friendship with an orphan named Ted leads him to bearing one of the 27 True Runes, the Soul Eater, changing his destiny forever. A farewell to his home, meeting the Liberation Army, the loss of those dear to him, standing against his father. These events, and more, are what lead him to become a hero, laying the foundation for a new era.

The hero is a slender youth, with dark brown hair and brown eyes. He wears a red tunic over a white, short-sleeved shirt and beige pants. He also wears black shoes with wraps around both feet.

Somewhat passive, the hero was known to be a nice, genial youth with a mischievous side that came to the surface around close friends and confidants. He was also said to have a certain irresistible charm.

His ability to keep moving forward despite the heavy burden placed on him as a bearer of the Soul Eater is what inspires a great many people to follow and trust in his abilities as a leader despite his youth. That burden also forced him to mature rapidly, dealing with the loss of so many comrades. 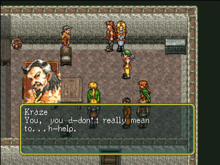 Okay, his ability to almost always hold back his anger.

His driving force was to fight for justice. Although some may have questioned the wisdom of prioritizing justice during war, for the hero, justice was his motivation for fighting and kept him going.

The hero also held a forgiving and pragmatic nature. His ability to hold back his anger for losses caused by the Imperial generals for the greater good was another reminder of his capacity as a leader. Seeing this in action only strengthened the bonds of loyalty and respect between the members of the Toran Liberation Army and the hero. 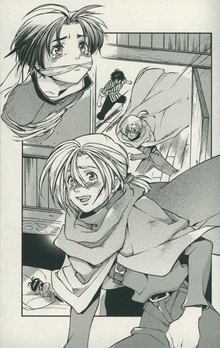 If only he had had his bandana....

The hero was born to Great General Teo McDohl of the Scarlet Moon Empire. His mother came from a common background and was considered to be a wise and caring woman. However, she passed away from illness soon after his birth and so the hero was mostly raised by Gremio, Teo's attendant. As a child, he was extremely clingy with his father as his only surviving parent, even trying to sneak into his carriage so he could travel with him on military expeditions.

During the War of Succession, McDohl was kidnapped by Assam as leverage to use against his father. Taken to Sarady, he would be rescued by the efforts of Gremio, Eiji, and Ronettes. This experience, and Gremio's tenacity in finding him, endeared the young master to Gremio.

With the support of Gremio and Teo's other subordinates, such as Cleo and Pahn, he grew into a vigorous young man with a strong sense of justice. Master Kai, meanwhile, trained him in the use of the staff as a youth. Once Kai left, his abilities became entirely self-taught.

Later, he would become best friends with Ted, who was brought to the McDohl household by Teo and adopted as a war orphan. 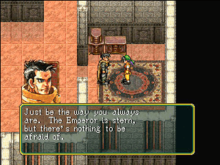 Just be yourself: shut up and say nothing.

He was sent to serve Emperor Barbarosa when Teo was assigned on a mission to the north and was supposed to be assured of a future in the Imperial Army. However, that changed completely when he inherited the Rune of Life and Death, one of the 27 True Runes, from his best friend, Ted. Mortally wounded, Ted would beg the hero, his only true friend, to take the rune, and the hero, trusting Ted in turn, agreed.

This brought down the attention of Court Magician Windy, who desired the rune herself, and he was soon driven from the Empire. Escaping Gregminster allowed him to see the truth of the Empire during his flight. Realizing the increasing oppression and disarray, he found himself turning his back on the Empire and seeing the world for how it truly was. 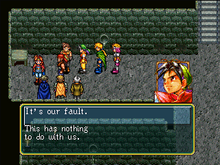 I was only following orders!

Brought to Lenankamp by Viktor who saw the use of recruiting the son of an Imperial general, the hero had a fateful encounter with Odessa Silverberg, the first leader of the Toran Liberation Army. Struck by her willpower and ideas, he was gradually drawn to the ideals of her movement. He would begin to correct his own mistakes, rescuing Varkas and Sydonia from execution in Rockland. In the wake of Odessa's death, he would be convinced to take up the position of leader of the Liberation Army.

Following Odessa's death and the Imperial crackdown on rebel forces, the hero and his friends make their way through the Fortress of Kwaba under pseudonyms. Although recognized by Ain Gide, he would be allowed to pass through as a favor to General Teo. 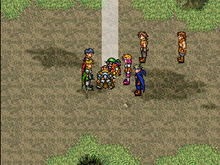 The heavens themselves bless my patricide.

In Seika, the hero would convince Mathiu Silverberg to join the liberation cause. It was here where he would also accept Odessa's true final wish; for him to become the new leader of the Liberation Army, determined to fight for his own sense of justice. Following Mathiu's advice, the hero headed for the old castle on Lake Toran with the idea of turning it into a new Liberation Army headquarters. With the help of the sailor Tai Ho and Camille, the group entered the foggy castle, defeated the Zombie Dragon, and succeeded in gaining their stronghold.

The war would continue to grow as the Liberation Army achieved success after success, uniting rebel factions throughout the Scarlet Moon Empire and toppling Imperial institutions in each region. The hero's will even managed to unite the forces of humans, elves, kobolds, and dwarves against the Imperial forces at Pannu Yakuta Castle. Bearing the Soul Eater, he saw the death of Gremio, killed his father, Teo, in a duel and witnessed the tragic fate of Ted. His father's peaceful pride in his son as he passed on was small comfort to him. Still, all the extreme hardships encountered in his struggle against the Empire never gave him pause. 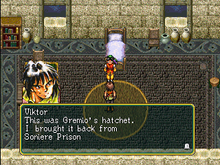 Kinda grisly but free is free.

Prior to the Battle at Floating Fortress Shasarazade, Viktor would give the hero Gremio's copper axe. At the time of the tragedy in Soniere Prison, the hero did not want to take Gremio's cloak and axe because he felt that if he did, it would mean accepting Gremio's death. But the many battles he had fought had made him a better and stronger man. Accepting the axe, the hero was now determined to win the battle for Gremio and for his many friends. Eventually, with help from his colleagues, he was able to lead the Liberation Army to victory, defeating the Empire and overthrowing Emperor Barbarosa.

Following the war, he was offered the position of President of the Toran Republic but refused the position. He had fought for his friends, for his comrades who died believing in him, and above all for what he believed in. Such a position was meaningless to him. Entrusting his affairs to Lepant, he left the country on a journey. 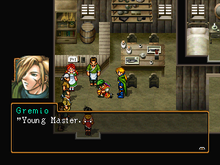 You are being very dramatic right now.

After leaving the Toran Republic, the hero's whereabouts were unknown until he eventually made his way to Banner Village along with his attendant, Gremio and spent some time resting there. Fearing the curse of the Soul Eater, he had turned away from fighting and intended to isolate himself but when a small village boy named Ko was kidnapped by bandits, he took up his weapon once again.

Cooperating with the son of Genkaku, when the bandits saw the duo, they immediately fled, leading their leader to explain that they had abandoned Ko after being attacked by a monster. Fighting the Poison Moth together, the two heroes unleashed the power of their respective runes to bring it down. 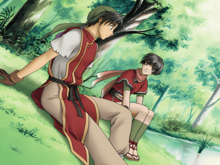 "So you're still into cursed runes, huh?"

Returning to Gregminster to tend to Ko, the hero was welcomed by many of his old comrades and offered the position of President once more by Lepant. He again refused, fearing the impact of the Soul Eater and, more importantly, wanting to remain free. He then spent some time at the McDohl house in the city for the remainder of the Dunan Unification War.

After his whereabouts in Banner Village became known, the ninja Kasumi occasionally came to visit the hero and together they would spend time reminiscing. As Kasumi continued to visit, she attempted to gather her feelings for him but to little avail, even as she felt the distance grow between them due to his unageing state.

Though he continued to keep his promise to Ted by holding the Soul Eater and fears its power, the hero also knew that the loved ones who have passed on would have wanted him to fight for justice. 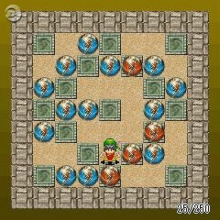 Just give Windy one of these, you hoarder.

The hero appears in Konami Wai Wai Sokoban (コナミワイワイ倉庫番), a Sokoban (box pushing puzzle) style mobile phone game developed and published by Konami for the i-mode platform and Yahoo! Keitai. It was released exclusively in Japan on March 7, 2006.

There, he is a playable character simply known as Hero (主人公, Shujinkō). He pushes Soul Eater rune crystals instead of boxes in his stages. The game was discontinued in 2007.

The costume of the hero appeared as a preorder bonus for Hayate no Gotoku! Ojō-sama Produce Daisakusen Bokuiro ni Somare! a simulation game in which you play as a butler working to make her lady's wish come through by coaching and helping her through various situations.

There were two versions of the game, each with exclusive ladies. The other version of the game had Jeane's Suikoden III dress as a preorder bonus instead.

The costume of the hero appears as DLC in the 2011 Konami-published action RPG, Frontier Gate. The costume was made available with a DLC code included with the purchase of a physical retail copy of Genso Suikoden Tsumugareshi Hyakunen no Toki.

The DLC provided five pieces of armor (helmet, body, pants, gloves, and boots) which, when equipped, would cause the player character to dress as the hero. 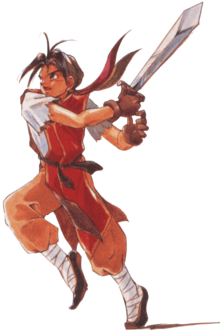 Originally the hero was designed to wield a sword and some pieces of art depict him wielding one. However, a decision was made to give the hero a more Chinese and/or continental Asian flavor and so the staff was chosen for him instead. He was originally conceptualized as the son of a bandit, which was the initial reason for his slightly torn clothing.

Originally Kawano Junko intended that the hero's signature bandana be green on the outside and purple on the inside, explaining the purple tail, but upon further research determined that the bandana could indeed be half-and-half and function as designed. She also paid special attention to his eyes, making them strong in each of her illustrations.

Murayama Yoshitaka had the intention of making the hero a true blank slate for the player to project onto, having him be a character whose personal growth occurs entirely during the events of the game itself. 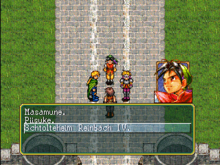 Each more canon than the last.

The hero of Suikoden has no in-game name but is occasionally referred to by different names in other publications and releases. A playthrough of Suikoden II or Suikoden III without any Suikoden data on it will have him referred to simply by his last name, McDohl (マクドール, Makudōru).

All Genso Suikoden Card Stories cards featuring him also refer to him as McDohl. In the 1999 novelization, Genso Suikoden Soul Eater, as well as the 2008 Radio Genso Suikoden: Assemble! 108 Stars! radio drama, he is called Tir (ティル, Tyiru), the most popular name used for him by fans. The 2009 manga, Genso Suikoden The Succeed Crest, gives him a different name, Louie (リューイ, Ryūi).