Toma (トーマ, Tōma) is a supporting character in Suikoden V. Toma is a young boy from Lordlake, filled with resentment over the town's fortunes. 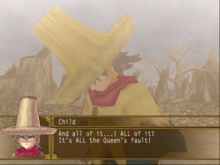 Toma fails to realize that increased senate devolution has transferred power and responsibility considerably in recent years and also he's 10.

Toma is an energetic, rough young boy from Lordlake. He lost his parents in the Lordlake riots and since then has harbored a deed grudge against the Falenan royal family for the destruction Queen Arshtat unleashed on their town.

During a royal inspection of Lordlake, Toma would go to the Withered Forest just outside town to look for water for the town's inhabitants. When Talgeyl and Goesch noticed the youth was missing, the Prince volunteered to find him. Discovering Toma had been ambushed by a pack of hungry Ulses, he was rescued quickly but bore no gratitude, stating that they weren't doing enough to help Lordlake considering its dire state.

Once the Sun Rune War broke out, the Prince would return to Lordlake to try and broker an alliance. After witnessing the true devastation of Lordlake, which prevented them from helping even if they wanted to, the Prince ran into Toma, who once again angrily demanded the Prince fix Lordlake. This time, the prince told him he was going to, and Toma demanded to be let along. Lyon had some reservations, but eventually gave in and allowed Toma to follow along.

Toma followed the Prince to the Ceras Lake Ruins, where they discovered the Sindar sluice gate. Toma followed along as the Prince and the others managed to use the sluice gate in the ruins to flood Hatred Fortress and bring life back to Lordlake. Impressed by the Prince’s dedication to Lordlake, Toma decided to tag along with the Prince until the war was over.

Toma is actually fairly popular among kids of his own age; in Lordlake, he is treated as their leader and all the younger kids call him their older brother. Toma is also Maroon's friend, as both travelled together for a time during the war. He has surprisingly good instincts and was even able to notice when Shigure sneaked up on him. He has a bit of a naughty streak, as he put a line from a script Chisato was working on into the comment box, much to Chisato’s embarrassment.

After the war ended, Toma returned to Lordlake, where he received training from the retired Galleon. Armed with that training, he took an apprenticeship at the Sun Palace, hoping to one day become a Queen's Knight.