Cleo (クレオ, Kureo) is a supporting character in Suikoden who makes a cameo in Suikoden II. Cleo is a servant of the McDohl household who followed her charge into the Toran Liberation Army during the Gate Rune War. 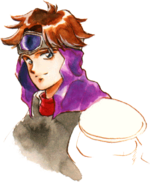 Cleo was conceived very early in the development of Suikoden, along with Pahn, as a prototypical "big sister" type character for the hero.

Cleo has brown hair and green eyes. She normally wore a silver circlet with purple fabric hanging from the sides. She also wore a brown tunic over red underclothes, protected by a breastplate and pauldrons on her shoulders. She also wore purple forearm guards. Purple leggings and boots, protected by a pair of silver greaves, completed her equipment.

In battle, Cleo uses throwing knives, flinging them with great force at the enemy.

Cleo was known to hold the manner of both a gentle woman and powerful warrior in the role of the hero's protector and companion. She was generally good natured and rare to anger. She showed no irritation to Hix's questioning of her being a warrior and remained calm in the face of Sonya Shulen's anger. One of the few incidents that earned her direct ire was the treatment of Varkas and Sydonia by Grady after their capture. She could also be irritable shortly after waking up.

In the past, she was more prone to outbursts, lambasting Gremio during the War of Succession for not being able to prevent McDohl's abduction to the point that Teo had to reign her in.

She often worried about the young McDohl and his relationship with his father but mostly Cleo seemed to keep her feelings hidden. She has a diary in her room in Gregminster but it is always locked. Cleo carries the key on her person. 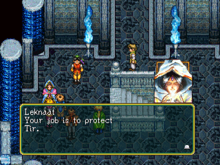 Cleo served as a direct subordinate of General Teo McDohl, living in his Gregminster home along with Gremio and Pahn. She and the hero held a close bond having watched him grow from infancy, with Cleo regarding him with real love as something akin to a younger brother. Cleo was also a knife throwing expert and there are heroic tales of her felling dozens of mounted cavalry on the battlefield single handedly with her knives.

When on a mission to Magician's Island, Cleo would be met by Leknaat who would tell her than her duty was to protect the hero before gifting her with a Fire Rune. Although puzzled as to why she was addressed specifically, as events would begin to spiral out of control, Cleo would remember these words and continue her efforts in playing out her role. Cleo aided Ted when he escaped from Windy, injured; Cleo was one of the first to notice that his wounds were magically inflicted and also was the first to recognize Ted's rune as one of the 27 True Runes. Later, when Kraze Miles came to collect Ted, Cleo stood her ground defending the McDohl household, arguing that no one could enter Teo McDohl's household without just cause.

Later fleeing Gregminster with the hero, Cleo would help her young charge in undoing some of the injustices inflicted by the Empire even after she worried about whether they could ever return to their past lives. Despite this, she would remain loyal, continuing to serve the hero as he rose to become leader of the Toran Liberation Army. During the war, Cleo would station herself in the room closest to the hero, in order to continue protecting him. As the war progressed, she would worry about the possibility of father and son having to fight each other. Still, Cleo would continue to defend the hero, never leaving him to endure his fate alone. 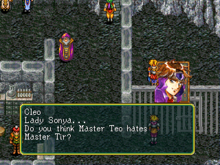 After Gremio's death at Soniere Prison as well as the death of Teo in personal combat with the hero, Cleo would choose to accompany the hero to the Lorimar region to try and distract herself from the personal losses suffered. She also may have recalled Leknaat's words to her at this time.

At the Warriors' Village, Hix would ask why Cleo fought, women not being fighters according to Warriors' Village tradition. Cleo responded that it was natural for her to fight as women also had things they wished to protect in the world, a pointed reference towards the hero. When thrown back to the Village of the Hidden Rune by the Star Dragon Sword, Cleo met the young Ted just prior to his bearing of the Soul Eater. Even though she knew it was not possible to change the past, Cleo felt intense anger knowing what Ted would have to go through in the following 300 years. She would try to encourage Ted and bolster his resolve for the long centuries ahead before returning to her own time.

Following Sonya Shulen's capture at the Battle at Floating Fortress Shasarazade, Cleo took the time to visit Sonya, who was still enraged from Teo's death. Cleo tried to comfort her by telling her of Teo's peaceful last moments with his son. Cleo empathized with Sonya's loss but expressed her sadness that someone who could have become the hero's mother could hate him so. Because of this, Sonya would agree to join the Liberation Army, despite her continued anger.

Following the end of the war, Cleo would decide she was tired of fighting and retired to the McDohl household in Gregminster. She would maintain the household in anticipation of the hero's return, welcoming him back during the Dunan Unification War.

Cleo is a name that is short for Cleopatra (or its male variant, Cleophalus). On its own, it is a Greek prefix meaning "fame", "glory" or "pride".

Her weapon is called the "Air Sword" (ひ天刀), with sword being a mislocalization as the kanji "刀", which, while meaning sword today, is an archaic word for dagger. "Air" may also be a mistranslation of "Hiten", a figure in Buddhist mythology. The weapon upgrades into "Air Moon Sword" (ひ天月刀) and finally "Air Moonstar Sword" (ひ天月星刀). Hiten are believed to be invisible, flying with incredibly power and speed, making them a most apt name for Cleo's throwing knives.