Valeria was born in a poor village in the vicinity of the Great Forest. At the age of 14, she was self-trained in the art of the sword in order to defeat the boar that had hurt her mother and avenged her with the aid of the swordsman, Kong Long.

Kong Long then trained Valeria for a time before she decided to train under the legendary Roundia Haia in Kanakan. There, she met Anita and the two became rivals, helping to spur on each other's development. 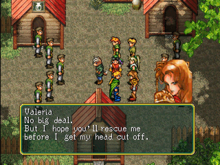 After graduating, Valeria was granted the Falcon Rune and she joined the Imperial Army. She earned the nickname "Blazing Valeria" due to her ferocity and red clothing. However, she would betray the Scarlet Moon Empire in an attempt to stop Kwanda Rosman from burning down the Great Forest.

Valeria was horrified at the idea of the Burning Mirror, which she knew could burn down not only Lukie Ende Towayo and the Village of the Elves but the entire forest, including her home. She attempted to warn the elves of Lukiae Ende Towayo, but was rebuffed and imprisoned in a cell. While imprisoned, Valeria met members of the Toran Liberation Army and agreed to join their cause.

Following the end of the Gate Rune War, Valeria became a Great General of the Toran Republic and a mediator with the elves.

During the Dunan Unification War, Valeria would give her power to the New State Army by order of Lepant. As a general, Valeria fought fiercely on the battlefield, showing both the New State Army and the Highland Army why she earned her nickname, Blazing Valeria. As part of the New State Army, she would encounter Anita again, the two rekindling their rivalry. They would spend some of their free together at the tavern, however.

Following the war, Valeria returned to Gregminster along with the soldiers she led. She would later meet to duel Anita in a continuation of their rivalry. They would be tied when Millie and Nash would interrupt the duel thanks to Viki's teleportation, leaving the result of their contest in doubt.