A Harmonian noble fallen from grace, Nash is a member of the Harmonian Southern Frontier Defense Force.

Nash, as a first class Harmonian citizen, had the blond hair and blue eyes that were the defining traits of the caste. He was considered to be a handsome man.

He wore loose, dark green clothing as well as a striped scarf. He worn brown gloves and boots. His loose clothes are worn in order to conceal the equipment he frequently carries. He wields the Twin Snake Sword Großer Fluss. By Suikoden III he wore a less concealing outfit.

Nash was said to have an unsoldierly personality and strived to avoid fights. However, when pushed he showed his true power and strength. Many of skills were learned from the Howling Voice Guild and Nash's talents were well regarded even there. Quick-witted and able to adapt quickly, Nash was a master of survival against improbable odds, a key trait for a spy.

He often showed a contrast of thoughtfulness and carelessness. It was said his carelessness was carefully curated to aid in his work as a Harmonian agent. He was also extremely unlucky and fell into all sorts of situations regardless of his intentions, which he tended to react to by blurting out whatever came to mind.

When he was older, Nash was described as garrulous, elusive, and was something of an idle flirt. Chris regarded him as skilled in wordplay but also cavalier and untrustworthy due to his allegiance and role as a spy. He would also make several cryptic references to a "missus".

The animals of Budehuc Castle had a peculiar relationship with Nash. Both Koroku and Connie tried to urinate on him and Rubi once swooped him up and deposited him in her nest. 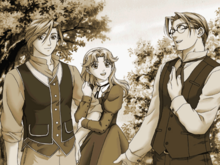 When times were simple and coats were optional

Nash was born the eldest son of the Latkje household, which held considerable influence in the People's Faction in Harmonia. In his youth, he spent two years in the Howling Voice Guild as part of his education, learning knowledge of explosives, but not receiving formal training as a gunner. There, he developed something of a rivalry with Elza, despite their differing roles and background. It was said Nash was never able to defeat Elza, although she was still impressed with his abilities.

Nash's life changed when Zaj Quiroz, a tutor to Nash's sister, Julie, poisoned their father to take over the family estate on the eve of his wedding to Julie. In retaliation, Nash attacked Zaj with the Twin Snake Sword Großer Fluss, severely wounding him. Thinking Zaj dead, Nash fled the household, unwilling to reveal the truth for fearing of hurting Julie further. 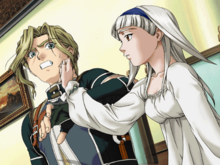 Nash joined the Harmonian Southern Frontier Defense Force and was stationed at Caleria, near the Grassland. On a covert mission to find information regarding the 27 True Runes, he sneaked into the City-State of Jowston during the Dunan Unification War. Entering from Highland, he ended up travelling with Sierra Mikain on his journey to Muse City. The two continued their respective journeys individually after the defeat of the vampire Rein Penenberg.

When Nash arrived in Muse City, he shared a room in the local inn with Templeton. During his stay, he not only met Clive, an old acquaintance from his Howling Voice Guild training, but also several other people who would later form the New State Army. He overheard how Jowy Atreides and his friend were trying to infiltrate a Highland camp near the border and decided to follow them. He stole the uniform of a Highland soldier and investigated the camp. He also met Jillia Blight and her brother, Luca Blight, as they had an argument. Eventually, he freed the captured Jowy and left the camp. 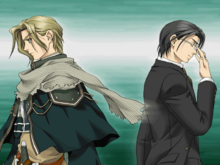 Turn around! He's right behind you! Either of you!

He then journeyed to Greenhill City where he encountered Zaj. He also played a crucial role in the defense of the city against the Highland forces under the command of Rowd, his military training being of great use. Hoping to gain revenge with his own hands on Zaj, he then abandoned his mission and returned to Crystal Valley.

Realizing that Zaj was trying to regain power in Harmonia, Nash began his journey back home only to be attacked by agents of Zaj and the techniques of the Howling Voice Guild. He was captured in Caleria and imprisoned by Barge but was rescued by his aunt, Lena Suphina. He eventually made it back to Crystal Valley and confronted Zaj. The two fought atop Klotzeo Church in the Harmonian capital, putting an end to the feud. Nash then left once again, despite Lena's attempts to reunite the fractured family, journeying towards the Grassland. 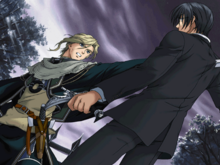 Do you know how much that suit COST!?

At some point Nash apparently returned to his family but at some point the Latkje family name would be dissolved and would eventually end up in the employ of Sasarai and was assigned to infiltrate the Grassland just prior to the outbreak of the War of the Champions. Although he still maintained his light air, his past with the Harmonian Southern Frontier Defense Force and the Howling Voice Guild made him a very talented shadow operative.

Investigating the conflict between the Grassland clans and the Zexen Federation, he would eventually meet up with Chris Lightfellow, following the trail of Jimba and the True Water Rune. He used the last name "Clovis" around Chris, but it was an alias in use for this particular mission only, taken from a no-longer existent Harmonian family. He was ordered to assist and motivate Chris' investigation in part to diminish the threat of the Zexen Knights.

Following the attack on Iksay Village, Nash entered into secret correspondence with Salome Harras. The two determined a hidden party was fueling the growing War of the Champions and agreed to work together to try and discover the identity of this group. As such, his main motivation in accompanying Chris was to investigate this and also to track the Flame Champion.

When Luc revealed his plans to Sasarai at the Circle Palace, Nash would try and defend the bishop only to be defeated handedly. Once he had recovered, he, along with Sasarai and his contingent, would align himself with the Fire Bringer in order to halt Luc's plans.

As soon as the war ended, he had disappeared, leaving no trail behind. Some say he stopped by Chris' room to say farewell before leaving.

Nash's last name has never been localized or romanized in any Suikoden game or publication. The localization "Latkje" comes from box text on the Japanese Genso Suikoden figurine set.

He shares the same last name (in Japanese katakana) as Miharu Ratokie from Mobile Suit Gundam.