Templeton (テンプルトン, Tenpuruton), also styled Templton, is a supporting character in Suikoden and Suikoden II who also appears in Genso Suikogaiden Vol.1. Templeton is a young, attention detailed cartographer whose dream is to map the entire world.

Templeton was a young cartographer from the land of Kanakan who dedicated his youth toward mapping the entire world in perfect detail and accuracy. For maximum detail, he chose to traverse the world himself, step by step. 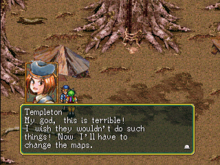 While traveling the world, expanding his map, he would have to update his map whenever there was a new discovery. Although young, the zeal he put into his task was exemplary.

He provided the Liberation Army with the Suiko Map and continued to work hard at Toran Castle, mapping its interior from his dedicated workspace. After the war ended, he journeyed the sea in order to find the edge of the world.

Three years later, he traveled the Dunan region where he met Nash Latkje in Muse City, deciding to share a room in the inn with him. He then went to the Mercenary Fortress and Toto Village, only to find them ravaged by the Highland Kingdom forces.

He subsequently joined New State Army during the Dunan Unification War in order to not only have new places to map but also to oppose forces that would either stop him from mapping their facilities or would destroy towns, leaving them to be remapped.

During the war, Templeton thought about returning to Toran Castle for a while once it ended, but then resumed his journey to find the edge of the world. 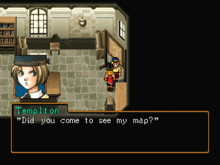 Would you like to see a map of the world map?

Despite his young age, Templeton is already an able cartographer who mapped the whole Scarlet Moon Empire and City-State of Jowston, creating two Suiko Maps in the process.

His abilities also proved useful in war battles, as he fought on the front-line together with Hugo and Sergei in the Gate Rune War. His knowing of the terrain especially came in handy in battles against the Highland Kingdom, as he led his unit through shortcuts.

He is not only well versed in the art of cartography, but also knows a lot of the local habits of certain areas. Thus, he was able to notice Nash Latkje's Harmonian accent when they met in Muse City only after a short dialogue.