Eileen (アイリーン, Airīn) is a supporting character in Suikoden who makes a cameo in Suikoden II. A dedicated family woman, Eileen is the wife of Lepant and the mother of Sheena.

Eileen is the wife of Lepant, President of the Toran Republic, and the mother of Sheena. Although she is quite lady-like, she is also a very strong-willed person. She first met Lepant at a party held by a regional lord. The two quickly developed feelings for one another, falling in love and getting married. 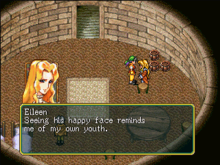 You're 10 years younger than him!

During the Gate Rune War, she was kidnapped by Kraze Miles but was rescued by her husband as well as the Toran Liberation Army. Following the incident, Lepant tried to divorce Eileen in order to join the Liberation Army free of worry. However, Eileen refused the divorce, loving her husband dearly and declaring that she had always been prepared for the worst ever since they first married.

Eileen was a skilled magician as well as talented at throwing arrow-like darts. Her magical abilities, as well as her dislike of fighting, seem to have passed down to her son, Sheena. During her time at Toran Castle, the Lepant family continued to reside together, maintaining their home life.

Following the end of the Gate Rune War and Lepant's ascension to the Presidency of the Toran Republic, Eileen was said to always be by Lepant's side, their relationship deepening further. In fact, some say Eileen has become the most powerful person within the nation, as Lepant is unable to talk back to her.